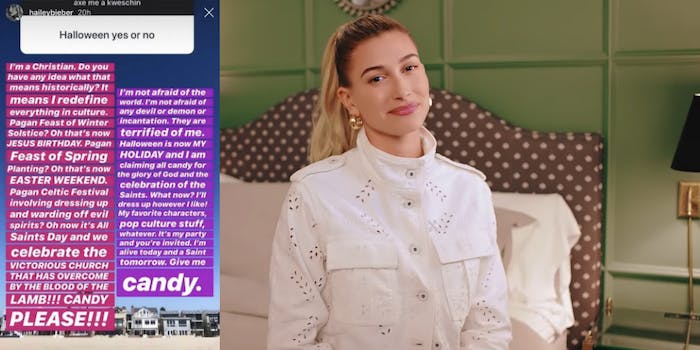 ‘Give me candy’: Hailey Bieber mocked for defense of celebrating Halloween as a Christian

'Halloween is now MY HOLIDAY!'

Hailey Bieber wants candy on Halloween and has come up with a strange explainer for why she should get it, despite being a devout Christian.

Bieber has received backlash over the notion that she will be celebrating the Celtic festival. In response to the question, “Halloween yes or no,” the model defended herself for the second time on Instagram.

“I’m Christian. Do you have any idea what that means historically? It means I redefine everything in culture Pagan Feast of Winter Solstice? Oh that’s now Jesus Birthday. Pagan Feast of Spring Planting? Oh that’s now Easter weekend. Pagan Celtic Festival involving dressing up and warding off evil spirits? Oh now it’s All Saints Day and we celebrate the victorious church that has overcome by the blood of the lamb!!! CANDY PLEASE!!” she wrote.

She and husband Justin Bieber both attend Hillsong, a church popular among celebrities, and it is now well known that they are a very religious couple. She went on to explain that she isn’t afraid of the world or demons and claimed Halloween–and the candy associated with it–to be her own holiday.

“I’m not afraid of any devil or demon or incantation,” she wrote. “They are terrified of me. Halloween is now MY HOLIDAY!”

hailey bieber saying halloween is her holiday and that its evil, have you met a goth and are you fucking stupid. the costumes were to scare evil spirits off, its an anti evil holiday dumbfuck pic.twitter.com/BFKiIxQD2z

“Obsessed with Hailey Bieber wanting to eat candy on halloween so bad she gives an entire lesson on Christianity absorbing other religions,” Twitter user @lizzzzzielogan wrote. “Girl it’s fine have a KitKat you don’t need to bring the crusades into this.”

obsessed with hailey bieber wanting to eat candy on halloween so bad she gives an entire lesson on christianity absorbing other religions girl it's fine have a kitkat you don't need to bring the crusades into this pic.twitter.com/jVsxgo7SLJ

Another simply told her to chill.

Hailey Bieber ready to colonize halloween in the name of manifest destiny pic.twitter.com/EpgPlhszLl

Others pointed out that the post was not originally authored by Bieber, but most still took issue with her reposting it, nonetheless.

Hailey bieber and the guy she reposted this from said let’s colonise halloween https://t.co/m7C0QoQias

“Hailey Bieber wasn’t the one to write that big post about Halloween,” Twitter user @aiinslea wrote. “Blame the person who actually wrote it.”

HAILEY BIEBER WASNT THE ONE TO WRITE THAT BIG FUCKING POST ABOUT HALLOWEEN, SHE CLEARLY DIDNT FIND IT THAT DEEP TO HAVE TO WRITE THAT MUCH SHIT, BLAME THE PERSON WHO ACTUALLY WROTE IT.

Regardless of the backlash and being mocked, one thing is clear: Bieber will be celebrating Halloween and getting candy this year–as a proud Christian, too.