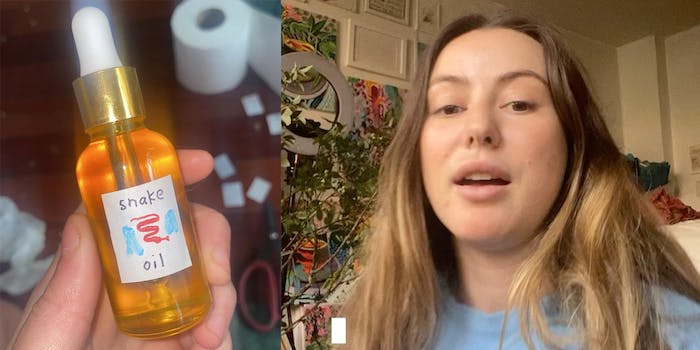 She claims it makes her skin look great, but people are skeptic.

Caroline Calloway, the Instagram influencer whose scams have often captivated and confounded the internet, is back with a collection of face oils whose name calls back to one of the original—and ultimate—product scams.

As Calloway explained in a series of Instagram Stories posted to her account on Monday, she’s obsessed with making her own face oils for both herself and her friends. Referring to those creations as “potions” (which she used in quotations), Calloway would take bottles of products she already had and mix them together; “I don’t invent anything new usually,” she noted.

But it wasn’t until her friends suggested selling those concoctions that it really came to her.

Calloway soon revealed her product, which she is calling Snake Oil, and the hand-drawn logo. The logo features a red snake drawn like a wave on a shield; she said she wanted to invoke a British crest. The products are placed in plain bottles apart from the logo, which has been added to the bottle.

Over several more Instagram Stories posts, Calloway offered even more claims about her product. She said that it was good for acne because one of the main ingredients is grapeseed oil and talked about the research she did on the use of oils for things like anti-aging. She lists several oils she likes, noting that “Basically, I’ve become obsessed with anti-aging oils and I’ve combined them all into the perfect mixture.” It’s unclear how many oils are included in Calloway’s claim that she “combined them all into the perfect mixture” because Calloway hasn’t posted a full list of ingredients, although she did list several oils she liked including clary sage, sandalwood, pomegranate seeds, and lemon peeled oil.

Calloway’s face oil would likely fall under FDA cosmetics regulation, which requires companies and people who manufacture cosmetic products by law to provide a list of ingredients so consumers know what is in the products they purchase.

“Packaging and labeling must not be deceptive,” the FDA’s fact sheet states. “If you manufacture or market cosmetics, you have a legal responsibility for the safety and labeling of your products. If your cosmetics are marketed to consumers on a retail basis, such as in stores, or by mail order (including online), or by personal sales representatives (for example, door-to-door sales), they also must meet ingredient labeling requirements under the Fair Packaging and Labeling Act.”

When asked about what ingredients are in Snake Oil, Calloway promised more information would be on the way.

“When we get professional labeling done, we’ll make back labels with all the ingredients as well!!!” Calloway replied.

The Daily Dot has reached out to Calloway for comment.

Calloway offered to sell 1oz. bottles of Snake Oil for $75 (but noted she might raise the price to $85 in the future). That price, she pointed out, is less money than a similar product being sold by Gwyneth Paltrow’s wellness company GOOP, which went for $98 (or $89 with a subscription). In another post, Calloway referred to her concoction as “ELIXIR OF YOUTH.”

“Not sure if I’m legally allowed to say that lol, but LOOK AT MY SKIN GODDAMMNIT,” she wrote.

Twitter had a field day with Calloway’s product reveal, which included a mix of poking fun at Calloway over her latest attempt to sell products that may or may not work to telling people that no, they shouldn’t actually use Snake Oil. And as some people pointed out, you could see cat hair in some of the photos Calloway posted, which could raise questions about both the product’s quality and potential contamination.

In an Instagram post and in subsequent Instagram Stories, Calloway revealed that her initial batch of Snake Oil sold out. She plans to make more products and plans to offer 4oz. bottles for $210 with plans to raise the price once official packaging comes in.

Is Snake Oil yet another scam? The name itself harkens back to one of the original scams: Originally a legitimate medicine used by Chinese immigrants in the 19th century, snake oil became shorthand for tonics that claimed to fix or cure a wide variety of aches and pains. When Americans tried to make their own version of those tonics with rattlesnake oil, they weren’t as effective. Sometimes, such as with Stanley’s Snake Oil (which didn’t have any snake oil in it), those products didn’t contain the ingredients its manufacturers said it had or didn’t do what it was purported to.

Ironically, fake snake oil would eventually lead to the passing of FDA and FTC regulations that required manufacturers to list the ingredients and affect how a product’s benefits are listed (e.g. you can’t exaggerate to say it does something it doesn’t). Calloway’s Snake Oil is subject to those federal agencies’ regulations today. It’s unclear whether the name is a direct nod to the scams of old or it’s a coincidence. But, no matter what the intentions behind the product are, the size of the backlash, or how much of it actually sees the light of day, it accomplishes one thing for Calloway: People are talking about her again.

While Calloway isn’t specifying anything about what went into her product, potentially acknowledged as much as the conversation around Snake Oil grew.

“I am the grift that keeps on giving,” she tweeted.

Update 2:59pm CT, July 8: In her latest Instagram post, Calloway gave her followers a close-up look at Snake Oil’s ingredients. The logo, which Calloway credits to Sam West, features a woman in red being eaten by a blue snake wearing a crown. (As some commenters pointed out, it looks incredibly similar to the Biscione coat of arms that’s long been associated with Milan.)

The label also includes instructions on how to use Snake Oil, which makes the product sound a lot more ubiquitous than she originally said.

“Apply to your face!” the label stated. “Your body! Your friends! Also good for cuticles, split ends and adding to a hot bath in order to feel like an Egyptian princess.”