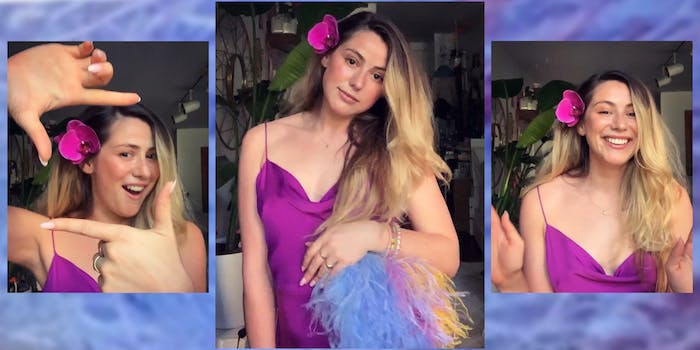 Caroline Calloway is selling tickets for a new workshop.

Caroline Calloway is ready to “scam” again. No, but seriously this time.

The Instagram influencer has re-launched her “creativity workshops”. The original events, planned earlier this year, were met with fierce backlash from fans, and Calloway was forced to cancel them due to lack of preparedness on her part. Many people called her a “scammer” after fans purchased $165-dollar tickets, only to have her cancel shortly after the events were announced.

But now, in an attempt at a comeback, Calloway is putting on the same event next month—which she has cheekily renamed “The Scam”. It will take place in New York City.

“I am hosting my first event since I went viral,” she wrote in a recent Instagram post announcing the workshop. “The main thing that’s different is that this time I want you to bring a piece of writing to workshop and possibly share with the group. Oh, and I’ll be a better teacher because the lessons I’ve learned this spring have been INTENSE and my summer self is EN FUEGO.”

Luckily for Calloway, the response has been welcoming, as fans have been eager to give the writer a second chance, even after the chaos from a few months ago.

“Do you worry that, now that you’ve titled the workshop “the Scam”, that if people DON’T feel scammed afterwards, you’ll get lashback for scamming them about scamming them?,” wrote one user on Calloway’s Instagram post.

“I am so concerned that every news platform in the world call me evil!!!!! OH WAIT JUST KIDDING LFG,” Calloway responded.

“Then let them eat their petty ass cake while you live your best life lfg!” the user responded back.

For those who need a full refresher, earlier this year, Calloway had been hosting “creativity workshops” around the country, which were supposed to offer fans advice on how to basically live their best lives. It mimicked her Instagram, which documented her fanatical life of studying at Cambridge University, partying with boys, and attending fancy and exclusive galas.

She was supposed to be writing a book about these adventures, but that also never came to fruition.

Much like Ring Pops and disposable razors, memories deteriorate with use. It’s science. According to a study by Northwestern University, every time we access a memory we tamper with it, editing the past with our feelings in the present. Or to put it like this: the only way to preserve our most precious memories is to forget them. Sometimes I worry that I’ve revisited my first weeks at Cambridge so often that the real story is too damaged to tell with accuracy—that something about the star-struck, devastated, bewildered way I felt when I arrived has been permanently paved over. I know now, for example, that Oscar and I will end up dating. We will spend Valentine’s Day in Paris and weekends at castles and untold hours of our lives watching movies on laptops. Cambridge will not always be a beautiful but hellish maze. I will, eventually, learn the street names; the college names; where to buy falafel at 3 AM (Gardies). I will even become friends with Josh after many upbeat and infrequent lunches in Manhattan. Once—and only once—Josh will say the name Oscar by mistake. “George,” I will correct him quickly. “The royal baby’s name is George.” But in the moment that this photo happened I couldn’t have imagined what was to come. And in fact, at this moment now, it’s hard for me to imagine how this photo felt. During the past week I’ve asked so many friends (spoiler alert: I make friends) what Cambridge was like at first and they all say it was a whirlwind. They cite Bambi-like awe. And sure, I get it. But when I look at this photo I see a staged kind of fun. Where is my jacket? Did I throw it out of frame, but keep the champagne? Why am I looking off into the distance? I had definitely asked for this photo to be taken. What I’m trying to say is that wonder can often run parallel to loneliness. And while the emotional sum of my first weeks at Cambridge would eventually add up to happiness, this photo was probably not the extraordinary moment it looks like. Sneaking past the porters wasn’t actually that hard. Conversation that afternoon with Oscar lulled. Things were real. And they would only get surreal-er. To Be Continued… #adventuregrams

The “creativity workshops” were supposed to be another way to experience what the book was no longer going to give—a way to connect with the girl who was literally living the life of our Instagram dreams.

But instead, the “workshops” were a disaster. Although she sold out many of the dates (priced at $165 dollars per person, not including air travel), Calloway failed to take into consideration how much time, attention, or money would be needed to pull this whole thing off.

She promised homemade lunches, care packages, flower crows, and one-of-a-kind teachings of how to, one supposes, be an Instagram influencer. But she did not deliver on the care packages or find ways to cook all the attendees homemade meals. Instead, she gave her fans mason jars with seeds on them (strictly for growing, not for eating). She gave them notebooks and a crystal that turned out to be a rock.

Things then escalated when Calloway tried to move the workshops to New York City and have fans just fly out and meet her.

Of course, that didn’t go over too well, and in the end, Calloway had to cancel all the workshops.

“If I had known how hard it was, I never would’ve tried,” she told BuzzFeed News at the time.

She later wrote on her Instagram, “I canceled my tour because I was frightened and feeling worthless because if you read enough bad things about yourself on the internet you will start to believe they’re true.” Then she added, “What else is there left to say, but life is a learning experience and I am proud to learn along side [sic] all of you on tour this spring?”

So now, Calloway, as promised, has launched a new tour called “The Scam” to poke fun at the “scam” she was accused of just a few months ago.

Fans seem to be loving her comeback. In addition to the praise she has received on Instagram, many have also taken to Twitter to share their support.

“Can someone spot me $165 + airfare so I can attend Caroline Calloway’s scam event? Her mind…HER MIND!!!!!!!! QUEEN OF SCAMS,” wrote user @sassyblackdiva.

Can someone spot me $165 + airfare so I can attend Caroline Calloway’s scam event? Her mind…HER MIND!!!!!!!! QUEEN OF SCAMS. pic.twitter.com/WfocM8JAmJ

“Okay honestly love this for her,” @dreamoforgonon responded. “I love when someone fully becomes the mask.”

And despite the fact that Calloway has lost nearly 10oK followers since the initial events, it seems that her true fans are still willing to do anything for her.

But it’s still too early to say whether or not it will be a success.

“It’s a get together type of event, but it’s also more than that,” she wrote to one user on Instagram. “I’m not an expert in everything, but I think I have learned things of value that I can teach.”

The event is scheduled for Aug. 3.  In the description on the workshop on the EventBrite ticket page, Calloway wrote, “Think my events are dumb? Don’t buy tickets, you fucking fools.” The price is still $165.