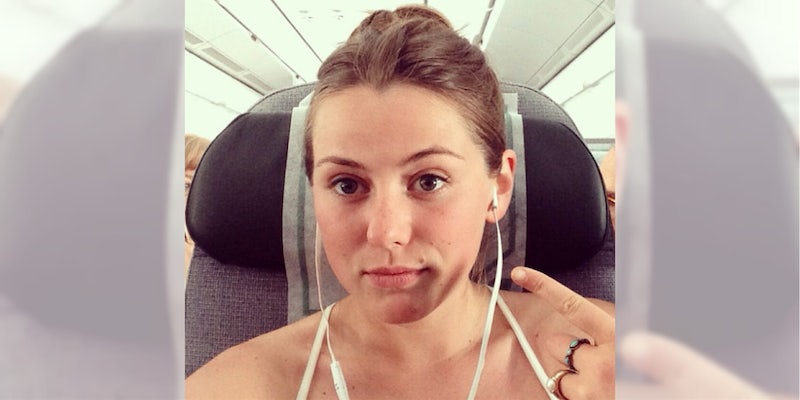 'This woman is a blatant scammer.'

A famous Instagrammer has canceled all the tour dates of a series of workshops she was hosting after a Twitter thread accusing her of being a scammer went viral. Caroline Calloway, 26, was selling $165 tickets for four-hour workshops in places like Washington, D.C., and New York.

According to Insider, over 1,000 people signed up for the “creativity” workshops that were advertised to include “personalized care packages, an ‘orchid crown’ making workshop, and salads personally made by Calloway.”

But the sessions apparently fell very short of their promises.

Anonymous DM from someone who attended one of the workshops. pic.twitter.com/6x2V3WEKiC

“I think that criticism is really valid and I apologize to anyone who felt cheated by the price point of $165,” Calloway said in an apologetic Twitter post on Monday. “I take full responsibility for letting my total inexperience with event planning and GREED create a situation where the details of the tour were ever-changing, preparation was inadequate, and the event did not meet the description by the time it went on.”

Kayleigh Donaldson, a journalist for Pajiba, documented what she called “scammer updates” in a detailed Twitter thread that spanned several weeks.

“This woman is a blatant scammer who’s now organizing a WORLDWIDE TOUR with this ‘workshop,'” Donaldson tweeted. “I think it’s categorical bullshit that nobody is talking about & that we glorify this ‘influencer’ nonsense.”

UPDATE: She's clearly been guilt tripped into, you know, paying people for their services. But she's "honestly a little overwhelmed" about how she's going to pay for it all. Should have thought of that before you started scamming! pic.twitter.com/QL2tpIyKsg

“I’m glad she’s made the decision to cancel the tour given the lack of preparation and questionable business decisions behind it,” Donaldson told the Daily Dot in a Twitter message. “I have no ill will towards her personally, whatever I think of her brand and how she tried to sell it… I hope this weird case allows us to further look into how social media and the notion of internet celebrity is often made toxic by greed, exploitation and parasocial relationships.”

Calloway hosted two workshops in New York before trying to move some of the dates to New York and ultimately canceling the tour altogether. After attending one of the workshops, a fan posted an open letter to Calloway to express her disappointment.

“Am I stupid for trusting you? Are we the real punchlines who spent our hourly wages to support you and see your ‘workshop’? Is this an instance of blind faith?” wrote the fan, Abigail Scott, in a blog posted Sunday. “Jokes aside, this is not cute. In the least,” she added.

In her post, Calloway said everyone who bought a ticket would be getting a full refund, even those who had already attended a workshop. All of her events have been removed from Eventbrite.

“If I ever do a live event again someday, the lessons I’ve learned from this experience will be at the core of its planning and organization,” Calloway said in her post.