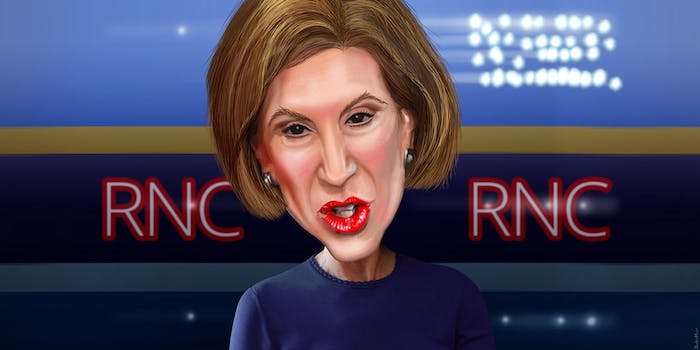 She's been called one of the worst tech CEOs of all time. Let's look at the facts.

In the week since Wednesday’s contentious GOP debate, Carly Fiorina has walked away the winner—both on social media and in the polls. She peaked in Google searches when mentioning her daughter—who passed away from an overdose—in response to a question about drug reform, earned the biggest applause of the night by cooly but deftly responding to Donald Trump’s criticisms of her appearance, and painted herself as a Washington outsider in a race where non-politicians like neurosurgeon Ben Carson and real estate mogul Trump are leading the pack.

“It’s not that politicians are bad people, it’s that they’ve been in that system forever,” Fiorina said of the career politicians on stage. “A fish swims in water, it doesn’t know it’s water.”

Fiorina has spent very little time in that water. She led an unsuccessful attempt for the Senate in 2010 but has otherwise spent her entire career in the private sector. Fiorina considers her experience as Chief Executive Officer of Hewlett-Packard during the shaky period during and after the Dot-Com Bubble her chief asset, but most GOP voters are likely unfamiliar with her business record. That matters—because Fiorina’s career is consequential not just to her as a candidate, it’s also our best lens through which we might understand what to expect from her as a president.

In a recent interview with CBS News, Harvard assistant business professor Gautum Mukunda said of Fiorina: “She’s not Donald Trump. She didn’t inherit her influence—she earned it.” Her family did not have the wealth of Fred Trump, but neither were they salt-of-the-earth scrappers. Carly Fiorina’s father, Joseph Sneed, served as a Staff Sergeant in World War II before becoming a law professor and then a judge on the U.S. Ninth Circuit Court of Appeals.

This might help explain Fiorina’s storied education. After attending a who’s-who of the top business schools in the country (Stanford, UCLA, MIT, University of Maryland) through the 1970s, Fiorina worked her way through AT&T in the 1980s as a sales representative for enterprise telephone services. In 1990, Fiorina was appointed Senior Vice President of the company’s hardware division, and in 1995, she was appointed head of AT&T’s North American operations.

Fiorina’s career is consequential not just to her as a candidate, it’s also our best lens through which we might understand what to expect from her as a president.

Later that year, Fiorina was placed in charge of operations at Lucent Technologies, a tech manufacturer spun-off from AT&T to make it possible for the telecom giant to sell equipment to competitors. Lucent underwent several major successes under Fiorina—she’s largely credited with the company’s record-setting $3 billion IPO and for reawakening the once legendary Bell Labs in the process.

As Bloomberg wrote at the time, Fiorina “launched a bold, $90 million brand-building campaign that helped transform the company from a humdrum maker of phone equipment into an Internet player supplying the gear for the New Economy.” It was her success at Lucent that led Fortune magazine to place her on top of their 1998 list of the most powerful women in business. “The only criticism you hear of her is that she’s too ambitious,” wrote the magazine.

Not so, today. In the years after Fiorina’s exit from Lucent, the company was forced to reveal a long trend of “vendor financing”—loaning money to customers so they can buy your products—to boost its earnings above expectations. During her Senate run, Fortune reported on hundreds of millions of dollars Lucent lent to doomed startups like PathNet so they could buy Lucent equipment.

Hey guys, wanna know what it'll be like being a US citizen under a Carly Fiorina presidency? Just ask any former Lucent/HP/Compaq employee.

Regarding Carly Fiorina, my mom worked at Lucent when Carly was president. She ran the company into the ground. Mom lost her life savings.

Much like Lehman Brothers and Bear Stearns during the 2008 subprime mortgage crisis, however, Lucent overstated the ability of these companies to pay back these loans and eventually had to admit to investors it had much less money than originally thought.

In 1999, when Fiorina left the company, it appeared to be in great shape. By 2002, when most vendors of Lucent had folded or failed to pay back the loans Lucent gave them, the company’s stock had dropped from a high of $84 per share to just $2 per share. Although she would deny it in 2010, Fiorina pushed for the short-term thinking that led to Lucent’s eventual downfall. “She intimated to employees and outsiders that Wall Street would generously reward companies that emphasized and delivered robust revenue growth,” Fortune reported in 2001.

By that time, however, Fiorina had been selected as CEO of Hewlett-Packard. As HP’s first female CEO and the first female executive to lead a Fortune 200 company, it was widely hailed as a progressive decision by the tech giant.

Running under the headline “What Glass Ceiling?”, Time painted Fiorina’s appointment as historic. The magazine’s Karl Taro Greenfeld wrote: “Although her appointment has not been so ballyhooed as Sandra Day O’Connor’s becoming the first woman Supreme Court Justice or Geraldine Ferraro’s running for Vice President—or, for that matter, America’s women winning the soccer World Cup—it is arguably more important than any of those milestones.”

To describe her tenure at HP as tumultuous is an understatement. As Fortune reports today, “a dysfunctional HP board committee, filled with its own poisoned politics, hired her with no CEO experience, nor interviews with the full board.”

She immediately had to oversee the spinning off of HP’s entire non-consumer productions, which became Agilent Technologies, and soon sought a controversial merger with Compaq, then the second-largest producer of personal computers after Dell. As a Stanford Business Journal paper reports, the 2001 merger proved to be far less profitable than Fiorina initially estimated and proved a turning point for her time at HP.

Although she would deny it in 2010, Fiorina pushed for the short-term thinking that led to Lucent’s eventual downfall.

Perhaps most importantly, it was the beginning of a period of bad will among HP employees toward Fiorina. A 2001 survey conducted soon after the merger found two thirds of HP employees saw no benefit to the merger with Compaq. To make matters worse, Fiorina soon had to ask employees to sign up for pay cuts to prevent layoffs. Although 80,000 employees agreed to reduced pay, Fiorina went on to layoff 6,000 HP employees.

Many criticized Fiorina for violating the “HP Way,” a set of guiding principles first put in place by Bill Hewlett and Dave Packard. The code became an industry standard by putting employees and shared accomplishment above profit and executive concern. Fiorina altered this image by changing the profit-sharing model for employee compensation to a productivity-based bonus model, individualizing each employee and changing the corporate culture for good.

By 2004, the Economist would describe HP as “huge, frail, and confused.” Earnings shrunk on an annual basis and HP’s stock began to plummet. Fiorina was dismissed in 2005—to the praise of employees and shareholders alike. She is widely believed to be one of the worst tech CEOs of all time.

Fiorina and others argue she laid the groundwork for her successors, making difficult decisions so HP could succeed over the long-term. Some have postulated Fiorina is a chief example of “the Glass Cliff,” a phenomenon in which female executives are placed in charge of doomed companies as a diversionary tactic so they are blamed for the difficult decisions that must be made.

“She really got a raw deal by her board,” UC Berkeley business professor Kelley McElhaney told CBS News. “There is no question that female CEOs are blamed for things like stock performance that they can’t fully control more often than male CEOs.”

At last week’s debate, Fiorina trotted out her own statistics about her time at HP, which paint her as a skilled sailor maneuvering HP through choppy waters.

“I led Hewlett Packard through a very difficult time, the worst technology recession in 25 years,” Fiorina said, referring to the Dot-Com Bubble that would take down companies like Lucent. “The NASDAQ stock index fell 80 percent. It took 15 years for the stock index to recover. We had very strong competitors who literally went out of business and lost all of their jobs in the process.”

Fiorina was dismissed in 2005—to the praise of employees and shareholders alike.

She even repeated an oft-mentioned anecdote about another famous tech CEO removed from his post. “When you challenge the status quo, you make enemies.” she said. “I made a few. Steve Jobs told me that when he called me the day I was fired to say, ‘Hey, been there, done that. Twice.’” While Jobs and Fiorina had a noted business relationship, in 2008, InfoWorld described her as the “anti-Steve Jobs.”

Whether any of this qualifies her for the job of president is questionable at best. In the same way Ross Perot, Meg Whitman, and now Donald Trump have had to qualify themselves based purely on business experience, Fiorina will have to explain how a contentious career in one profession has given her the ability to perform well at a completely different one. Judging a business career as a qualification for government is like watching someone farm and wondering if they could bake—the jobs are just too different.

During the debate, Gov. Chris Christie (R-N.J.) criticized Carly Fiorina and Donald Trump for citing their business background as part of what makes them good candidates. “The fact is, we don’t want to hear about your careers,“ Christie said. “You’re both successful people. Congratulations.” But Chris Christie is wrong: Carly Fiorina must prove bridge the gap between leading a company and holding the highest office in the United States.

In order to make an informed decision about whether she’s ready to lead, it’s time to take a hard look at her history of leadership.