Tesla vs Edison: Learning from Epic Rap Battles of History

Ahlquist and Shukoff's Epic Rap Battle between Tesla and Edison reveals something crucial about styles of American invention and innovation.

Steve Jobs vs Bill Gates. Thomas Jefferson vs Alexander Hamilton. Mozart vs Salieri.  Aristotle vs Plato. Much of history can be interpreted as the clash of two powerful personalities, each representing opposite sides in a major debate. These clashes are the juice of history, and Lloyd Ahlquist and Peter Shukoff, the creators of Epic Rap Battles in History, have figured out how to make them come alive for pop culture in the 21st century. According to a recent Wall Street Journal story, their YouTube channel now has 3.4 million subscribers. Ahlquist and Shukoff provide a provocative and lively way to think about important issues relating to technology, business, and society. 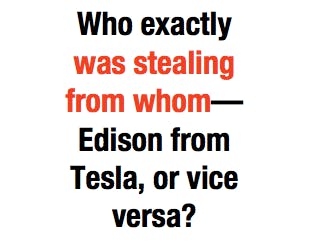 One of their newer videos, on Thomas Edison vs Nikola Tesla, hits home for me—a history professor with a specialty in studying heroic inventors and entrepreneurs, with a new book just out on Tesla. Tesla’s all over the Internet these days, from Matt Inman’s celebration of Tesla in his online comic The Oatmeal to Dorrian Porter’s KickStarter campaign that just raised over $125,000 to erect a statue of Tesla in Silicon Valley. Tesla’s growing online popularity comes from the fact that he can be seen as the ultimate geek: an individual who loves technology, pursues innovation for its own sake, and refuses to be debased by the profit motive. The Epic Rap Guys have picked up on this image of Tesla and drive it home by pitting him against Edison. By doing so, Ahlquist and Shukoff give us the chance not only to laugh but to think about the tension between creativity and money.

Of course, like Inman, the Epic Rap guys get a few facts wrong. For instance, one recurring claim is that Edison stole from Tesla. As Tesla says to Edison in the video,

So confess to your thefts

and let the whole world know

what the Serbian did for the Wizard of Menlo . . .

your best invention was a way to steal credit

This common myth doesn’t have a lot of truth to it. What Tesla (e.g., the Serbian) did for Edison was to design an arc-lighting system while working at the Edison Machine Works in 1884. But when the company decided it didn’t need an arc-lighting product and refused to pay him the $50,000 he thought he deserved, Tesla ran off with the design to start his own arc-lighting company, in Rahway, New Jersey. So who exactly was stealing from whom—Edison from Tesla or vice versa? 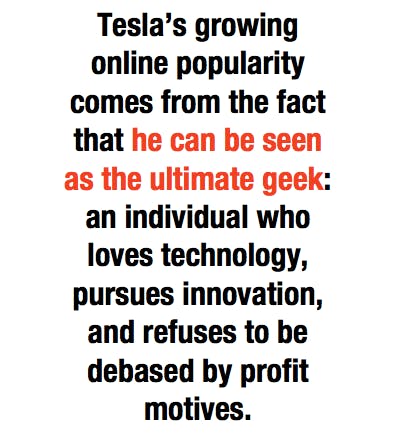 But it’s not really fair to hammer Ahlquist and Shukoff or Inman on historical details. As Inman points out rightly about himself, “I’m a comedian and I speak in hyperbole…I exaggerate for the sake of comedy.” The power of exaggeration and comedy is to make us laugh and see things that we might not have noticed before.

That’s the power of the Tesla vs. Edison video, as well—it gives us a chance to see something new about invention. The video highlights how Tesla and Edison represent two very different approaches, or styles, to invention. Here I mean style in the same way that we apply it to art: Inventors, like artists, have their own distinctive way of choosing problems and working through solutions.

Edison always said that he invented in response to needs and wishes that people already had. As he emphasized, “Anything that won’t sell, I don’t want to invent. Its sale is proof of utility and utility is proof of success.” With his incandescent lighting system, Edison saw that city dwellers were already installing gaslights in their homes, and he developed an electrical alternative. Economists would call Edison’s approach market-pull innovation, meaning that he let the demands of customers “pull” his creative work in certain directions. 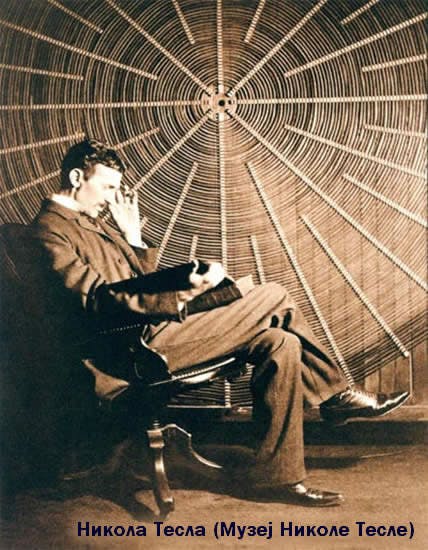 Throughout his long career, Edison stayed close to the business side of invention, launching new companies to manufacture his lamps, phonographs, movies, and storage batteries. As Edison proclaims in Epic Rap Battles,

Tesla, by contrast, is often portrayed as being otherworldly, not concerned about things like manufacturing. Tesla tells Edison,

You couldn’t handle my gifts

with your greedy little mind

was ahead of its own time

The truth is that Tesla did in fact understand that, as an inventor, you had to have a business strategy. Rather than set up manufacturing companies, Tesla just preferred to patent, promote, and sell his inventions to investors or businessmen.

With his alternating current motor, for example, Tesla first secured strong patents, then promoted the invention through demonstrations and interviews—and finally, when public excitement peaked, he sold the patents to the highest bidder (in this case, George Westinghouse). Tesla’s patent-based strategy is not at all unusual and is in fact still utilized by lots of innovators and entrepreneurs in high tech today.

More than just comparing business strategies, Ahlquist and Shukoff use the energy of rap to probe deeper differences about what these two titans of technology may represent. By putting Edison and Tesla at the opposite poles of greed and virtue; dirty deeds and pure ideals; ordinary technology vs revolutionary technology; commerce vs art, the Rap Guys set up a powerful dichotomy, forcing us to see how we create villains and heroes in the stories we tell about technology. 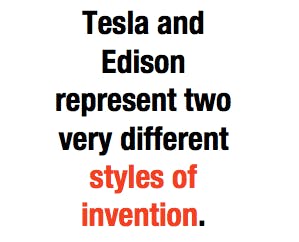 Edison is portrayed as a greedy and ruthless businessman who will do whatever it takes to get ahead—stealing ideas and crushing people. He apparently doesn’t care about people or humanity; indeed, Edison is shown in the video electrocuting a poor dog, a reference to the animals killed by the Edison Company hoping to demonstrate that the alternating-current system designed by Westinghouse and Tesla was much more dangerous than its direct-current power system. (Fact alert: Edison did not electrocute any animals himself; these gruesome demonstrations were conducted by one Harold P. Brown, who was loosely affiliated with the Edison Company.)

For the Epic Rap Guys, the most damning evidence in support of this unequal dichotomy is that Edison supposedly conspired with Wall Street tycoon J.P. Morgan to foil Tesla’s plans to distribute power for free, by transmitting it through the earth from his laboratory on Long Island. As Tesla tells Edison:

It’s a wireless transmission of truth

and it’s shocking real story of a banker and you

they would curse the Con Edison with every utility

Tesla, on the other end of the spectrum, is portrayed as the flaky visionary (“a geek plagued by OCD”) who invents for the good of humanity but who dies broke, with only pigeons as his friends. With lightning flying from his fingertips, Tesla thunders at Edison,

You did not steal from me, you stole me from mankind!

Clearly, we are supposed to see Edison as the villain and Tesla as the good guy and martyr. Edison’s relentless pursuit of profits crushes the charisma of Tesla’s artistry. 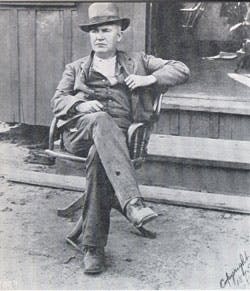 While such polarizations of good vs. evil are great for popular culture, they don’t necessarily tell us how we should think about technology in our lives and in society.  Setting up Edison as the villain and Tesla as the hero is a false dichotomy because the economy needs both kinds of inventors. It’s not the case that Edison was bad and Tesla good; American society has thrived by encouraging different styles of invention.

We need visionaries like Tesla, the Wright Brothers, or Steve Jobs because they look beyond existing needs and markets to create new technologies that disrupt routine business practices and everyday life. Guys like Tesla provide the ideas needed for the creative destruction that economist Joseph Schumpeter argued was at the very heart of capitalism.

Tesla’s pursued disruptive technology, I believe, out of a personal, inner need to impose order on the outside world. But at the same time, we need hard-headed business people like Edison, Westinghouse, Henry Ford, or Gates—thinkers who can take new inventions and figure out how to manufacture and market them to millions of people.

So it’s great to laugh and enjoy a video like this, to see how the Epic Rap guys brilliantly use humor and music to make the different styles of Edison and Tesla come to life. But it’s also important to recognize that America was made great by both Edison and Tesla (and many others like them). Each made significant contributions to our economy and society, and it would be a pity to demonize one man and make the other into an unapproachable saint.

Bernie Carlson is Professor and Chair of the Engineering and Society Department at the University of Virginia. A historian of technology and business, he has published widely on invention and entrepreneurship. His newest book, Tesla: Inventor of the Electrical Age, has just been published by Princeton University Press.