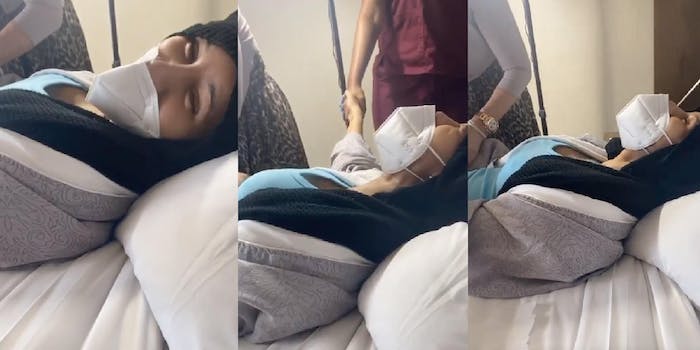 Cardi B posts video getting a bikini wax during global pandemic

Georgia re-opened this weekend. But her decision sparked online controversy.

Rapper Cardi B posted a video of herself getting a bikini wax on Sunday during the global pandemic.

On her Instagram story, she posted a three-part video of the process. The video was captioned, “Today is pain day.”

In the video, there appears to be a least one person waxing Cardi B, someone filming, and someone holding her hand as she screams in pain. The rapper is wearing a face mask.

Cardi B and her husband Offset, a rapper known for his group Migos, live in Atlanta. While Cardi B wasn’t breaking shelter-at-home orders in her city, health organizations recommend that people continue to social distance as the number of U.S. coronavirus cases nears one million.

“We were successful in our efforts to protect Georgians and our state’s healthcare infrastructure,” Kemp tweeted. “Now, with favorable data and approval from state health officials, we are taking another measured step forward by opening shuttered business for limited operations.”

The first day that beauty salons and estheticians could begin accepting customers was on Friday. Just two days later, Cardi B was in the salon getting the wax.

Atlanta Mayor Keisha Lance Bottoms (D) has been vocal in her opposition to the “reopening” of the state–and her city.

“If you’re getting your nails done right now, please share these noon numbers with you manicurist,” she tweeted along with Georgia’s number of cases and deaths.

The mayor isn’t the only person against the governor’s decision to reopen.

The Institute for Health Metrics and Evaluation, an independent health research center at the University of Washington, has recommended that Georgia does not begin reopening until June 22.

Even at that date, the health organization said the state should have used containment strategies, like testing and limiting gathering sizes.

From what can be seen in Cardi B’s Instagram story, it seems like the rules on estheticians aren’t too strict. After the video of the wax, Cardi B also showed off her new nails, which she commented were “too long.”

At least before Georgia lifted the shelter-at-home orders, Cardi B appeared to be quarantining.

The rapper became the star of the epidemic after a video went viral of her saying “coronavirus.” The video was later remixed into a chart-climbing bop. Cardi B was also politically active and previously dragged the federal government’s sluggish and inadequate response to the coronavirus.