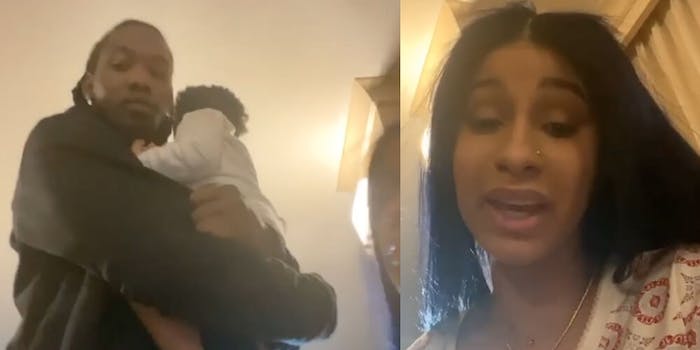 Fans think Offset pretended to be hacked after alleged cheating

After allegations of Offset sliding into the DMs of Tekashi69’s girlfriend, the Migos rapper claimed that his account had been hacked.

But some fans think this is just a coverup to not get caught cheating on his wife, Cardi B–again.

On Tuesday, Tekashi69’s girlfriend Jade Wattley posted an Instagram video that showed her holding her phone and clicking to an Instagram message from Offset reading, “Miss u fr.”

Wattley tagged Cardi in the caption, writing, “Your wife Cardi B has an open criminal case, why are you writing me, you don’t respect her? There’s a lot of shit I haven’t exposed yet, but there’s a time for that. I’m the queen of talking shit now I’m backing it up.”

Offset’s defense to the alleged Instagram message was that his account was hacked. But then there were random tweets posted to his Twitter account shortly after Wattley’s post that has fans speculating if Offset was pretending to be hacked to cover his tracks.

“Offset sent the DM at 1:36AM and shorty posted it at 2:30PM. Then he got ‘hacked’ at 2:35PM. He should have gotten the tweets off right after he sent the DM,” Twitter user @highfrequencyOG wrote.

It also didn’t make sense to some fans how being hacked on Twitter explained sending a message on Instagram. Nothing obscure was posted to Offset’s Instagram that would make it seem like he was hacked.

The fact that offset sent her a DM on IG but his Twitter got hacked????. pic.twitter.com/0mIn2BfRjc

“Just woke up and we dealing with this shit,” Cardi captioned one of the videos.

In the third video, Cardi is speaking as Offset is holding their daughter, Kulture, in the background. She explains that their relationship has been good, and his accounts have simply been hacked.

“Everybody know he’s done some dumb shit … We had a sweet weekend. Life’s been good,” she says. “That’s why I’m not entertaining the bullshit.”