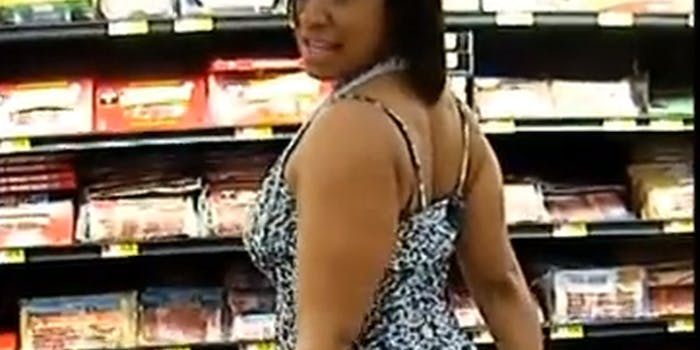 The chronicles of Caramel Kitten’s twerkin’

In the past two weeks, a 27-year-old self-proclaimed webcam diva has racked up close to a million views on YouTube.

Warning: This article contains sexually suggestive content that may not be suitable for work.

Move over, People of Walmart.  There’s a new queen of the big box and her name is Caramel Kitten.

In the past two weeks, the 27-year-old self-proclaimed webcam diva has made thousands of fans and has racked up close to a million views on YouTube with a series of videos that show her twerking at various locations.

For the uninitiated, twerking is a type of dance wherein a person squats down and furiously shakes his or her moneymaker. According to Know Your Meme, the dance was popularized in the early ’00s thanks to hip-hop artists like Ying Yang Twins and Bubba Sparxx.

Twerk videos are nothing new. In fact, a cursory YouTube search of the term produces more than 1.6 million returns. What separates Caramel Kitten from the rest is her willingness to twerk it out at seemingly random places with absolutely no music. The most popular of her videos, entitled “Twerking at walmart pt. 2 (18+),” shows Caramel Kitten twerking in front of cakes, milk jugs, and just about everywhere else in the store.

Since it was posted on YouTube nearly two weeks ago, the video has garnered 381,661 views. The first wave of these came from Facebook, where it picked up more than 20,000 views in the first day. “Twerking at walmart pt. 2 (18+)” also gained viral steam thanks to multiple blogs, including Dlisted, Barstool Sports, and Crunk and Disorderly, who noted that Caramel Kitten as having “the only channel worthy of your subscription.”

The rest of Caramel Kitten’s videos are equally enthralling, and she has something for everyone.

For motorheads and gadget junkies, she twerks it by the batteries:

For the fashionistas-on-a-budget, she twerks it at the thrift store:

And finally, for the bookworms, she (quietly) twerks it out at the library:

“Twerk is in the heart. The location doesn’t matter,” she said. “But, yeah, it doesn’t surprise me that the Internet loves something that is both overtly sexual and endearingly awkward.”

The Daily Dot has reached out to Caramel Kitten. We’re guessing she was too busy twerking it to respond.