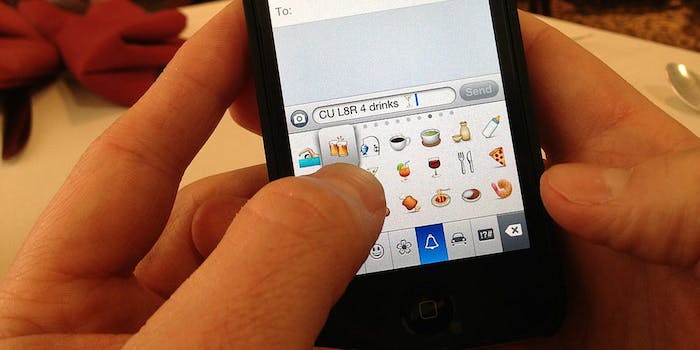 This issue isn't black and white.

Despite being highly active in the digital world, I tend to be a slow adopter. I only got a smartphone in 2013, I signed up for Twitter in 2009 after the initial nerdly wave, and I downloaded Flappy Bird just before it was delisted. (No, I won’t tell you my high score.) Emoji were one of those things that I kept seeing everywhere, but I figured they were something only the cool people used—until I figured out how to enable them and then I went wild.

My passion for emoji now knows no bounds, and I unironically love them. I am the living, breathing epitome of the emoji-abusing millennial, and I 100 percent don’t care. But there’s a problem with emoji: There are some icons that seriously need to be there—and aren’t. I’m not talking about the avocado (although, seriously), a wider range of cats, or even the taco (I live in California, where the lack of a taco emoji is a serious problem).

I’m talking diversity. Most emoji figures are white, except for the racist caricatures, which doesn’t really cut it. How I do I depict the people of color in my life when I’m texting, tweeting, or whatever else I’m up to? When I’m writing long screeds in emoji, how do I include people who are not white? For that matter, there are no disabled people in the standard emoji set either, which cuts out fully half my friends—how is a wheelchair user supposed to depict herself in a text?

Katrina Parrott had the same questions, except that unlike me, she’s an ex-NASA employee and she caught on to app development very quickly. Late last year, she released iDiversicons (which just became available on Android, too), an application that allows users to cut and paste icons into texts, tweets, and more. The icon set, currently numbered at around 900, includes multiracial icons, a variety of people in different careers (male nurses, female soldiers, for example), and a hot dog, which apparently was a frequent request.

Except that her icons are images, not Unicode icons, and using them requires painstaking cut and pasting—not so great on the fly. They also display vertically, not horizontally, so you can’t paste in a row of iDiversicons as you can with emoji. She plans to approach Unicode to discuss adding icons to the default keyboard, but this could involve a wait time of up to two years, and even if Unicode approves new icons, that doesn’t necessarily mean third parties need to render them as diverse individuals, because Unicode sets the standard, but Apple, Google, and others decide what the icons will actually look like.

Unicode doesn’t seem that interested in diversity, either. They just released an update list of 250 new emoticons (which haven’t been implemented yet), including obviously pressing concerns like “levitating businessman,” “black folder,” “northeast-pointing airplane,” “slightly frowning face,” and, of course, the middle finger. Critics fighting for better representation in the emoji set were not impressed, but, predictably, developers and Unicode pointed fingers at each other to escape responsibility.

Unicode says it doesn’t set any standards about skin color, hair, or other traits—hey, guess it’s up to the developers to decide how they want their emoji to appear, and what a funny coincidence it is that when left to their own devices, developers choose to use white people as the universal abstract face. Developers, though, say that they’re just sticking to the Unicode standard.

While creating an app with new emoji is a great step for people who want diversity now and who want to make a comment on the lack of diversity in emoji, it doesn’t solve the larger problem. Why is whiteness the default in developer renderings of people in the emoji keyboard? A police officer could just as well be a Latina, just as a nurse could be a black man. Unicode doesn’t actually specify, and the current keyboard display says a great deal about the default assumptions of developers and illustrators.

It’s also an issue because the people who most need to see diversity aren’t going to seek it out with an application. White people participating in institutionalized racism should be reminded when they flip to the emoji keyboard that other people exist, and those people play an active role in society. People of color seeing themselves in the emoji character set is critical but forcing white people to acknowledge race is also important; because in this “post-racial” society, people continue to assume that whiteness is the default, and they think that ignoring race is the best way to deal with it.

We need a diverse emoji keyboard integrated directly to ensure that emoji display consistently across applications and platforms, and that everyone can see them. We need it so that young people of color and young disabled people can see themselves in the texts they see, and feel acknowledged as part of society—just as adult users should be able to see reflections of their identity in their messages, too. And we need it to remind white, nondisabled people that they are not alone, that in fact the world is a big place, one where schoolteachers can be men and women can go to war, where Black women are scientists and Latino men are lawyers, where racially mixed relationships of all stripes pepper the landscape and diverse children are a part of the world as well.

The pressure for a more diverse character set has been mounting, and this is a classic example of activism on multiple fronts. While some are writing petitions to demand more diversity, others are developing their own apps to confront the problem, and others are adding their voices on Twitter and other social media platforms to demand a change in the default set. Especially in the wake of the newly-released, yet oddly undiverse, set of emoji, the Internet is making its opinion on the issue clear: It’s time for developers and Unicode to stop blaming each other, and get it together.

While Unicode doesn’t specify much about the physical appearance of emoji beyond traits necessary to convey the given image, it’s notable that it does include characters like “blue heart,” which does specify a color. Clearly the Unicode team is capable of deciding when and where a color determiner should be included in a character description, so why can’t it do the same for people?