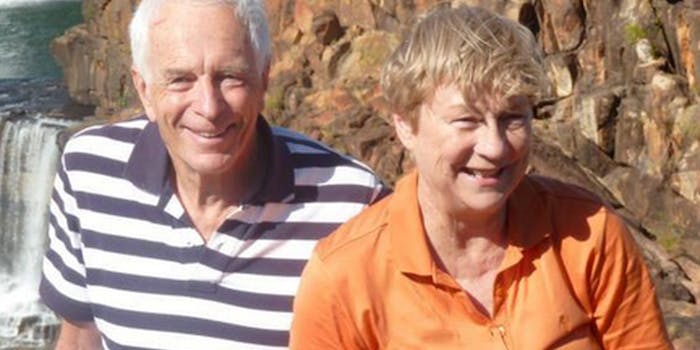 A photo of an elderly couple was the only clue, but Facebook was able to find the memory card's owner.

After racking up more than 30,500 shares on Facebook, a picture of a couple from a lost camera memory card has been identified.

South Australian resident Susan Templer spearheaded a Facebook campaign to return the card to its rightful owners after seeing a lost-and-found posting about it in a newspaper. Her international outreach effort worked as two of the couple’s nieces spotted the posting and the man in the picture contacted Templer.

“I have no idea as to how I lost the memory card—fortunately most of the photos have been downloaded and I suspect that I was using the card as a backup card as my current card was nearly full,” he told Templer according to Adelaide Now. Describing the memory card’s return as “ecstatic,” the man said the card was lost during a Christmas hiking trip in Mitchell Falls in western Australian. The couple is making arrangements with Templer to get the memory card back.

“I said I hope you don’t mind being a celebrity because you’re everywhere,” Templer told the man.

Templer, who had also lost a camera memory card, said she involved herself in the search after seeing an ad for the lost card in a local newspaper believing it was hers.

“This woman had found a memory card in Burnside on a walking trail,” said Templer. “I called her about it and she sent me one of the photos on the card, of this elderly couple. I thought, well that’s obviously not mine, but maybe I can help find the owners.”

Templer said she was “completely overwhelmed” by people’s efforts to help her.

“I had my handbag and my husband’s wallet stolen and…they were returned by a complete stranger who found them on a walking trail, so I just want to pay it forward, basically,” she said.

“I want to do the right thing because I know what it’s like to lose a lot of photos.”