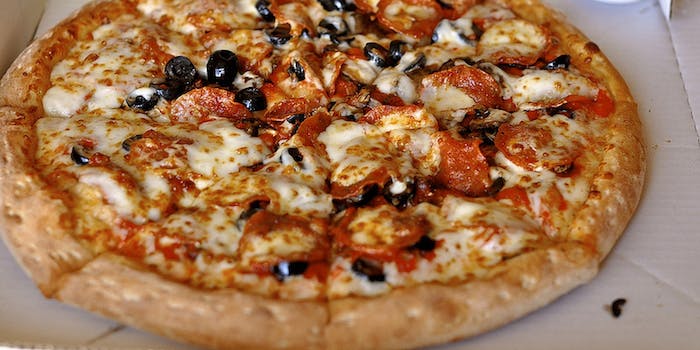 A black Papa John’s customer checked his voicemail to find a butt-dialed racist voicemail by the man who’d just delivered his pizza.

At least one racist Papa John’s employee in Sanford, Fla., the city where Trayvon Martin was shot and killed, is out of a job.

On Sunday night, a black Papa John’s customer checked his voicemail to find he’d been butt-dialed by the man who’d just delivered his pizza. He was stunned when he realized what the message contained: The phone caught the delivery driver mocking the man and his wife to his coworker, accusing them of being bad tippers, and, bizarrely, singing a made-up, racial-slur-filled opera song.

“That’s the only requirement for being a n****r in Sanford,” says the voice in the message. “Yeah, they gave me five bucks there. Fine, outstanding African-American gentleman of the community.” Then he begins to sing.

The customer filmed the voicemail and posted it online.

The video landed on WorldStarHipHop and YouTube, garnering more than 271,000 views and 5,300 comments since Sunday night. Many said they’d called the Papa John’s location and the driver, whose numbers are clearly visible in the video.

The Papa John’s manager, Keith, confirmed the video is real. He said the team members involved have been fired.

“We were made aware of the video and it’s under investigation,” he said. “We’re sorry that it happened.”

He said the Papa John’s has received about 300 calls since last night, not all of which have been media. Some have been angry citizens, some have been pranks.

That area of North Florida is demographically more similar to the south of the United States than it is to the rest of Florida. According to the 2010 United States Census, Sanford is 57 percent white, 30 percent black.

When I called the driver, his mailbox was full. “Hi, this is Jordan,” said the message. It sounded like the voice in the video. “If I don’t pick up the phone, just text me.” A text was not yet returned.

It’s not the first time a Papa John’s employee was canned over a racist message. In January 2012, a receipt calling a customer “lady chinky eyes” cost a waiter his job at a NYC location.

Friends, I am extremely concerned to learn about the reprehensible language used by two former employees in one of our restaurants. Their thinking and actions defy both my personal and the company’s values, and everything for which this company stands. The employees responsible for this absolutely unacceptable behavior were immediately terminated.

My heartfelt apology goes out to the customer involved, his family, and our community at large. I am very sorry that anyone would be exposed to these hurtful and painful words by any person involved in any way with our company.

Thank you for your important comments. I have personally reached out to our customer to share my own thoughts and offer my deepest apology.

I, too, am extremely appalled by these former employees’ actions and sincerely appreciate it being brought to our attention. The thinking of these people is counter to mine and my company’s values and we will not tolerate it. We immediately terminated those involved and will continue to educate all on our team. I personally have reached out to the customer to share my deepest apology.

We thank you for allowing us to correct this horrible situation.


Correction: An earlier version of the article misidentified the song as the overture to The Marriage of Figaro. It’s actually Figaro’s aria from Rossini’s Barber of Seville.