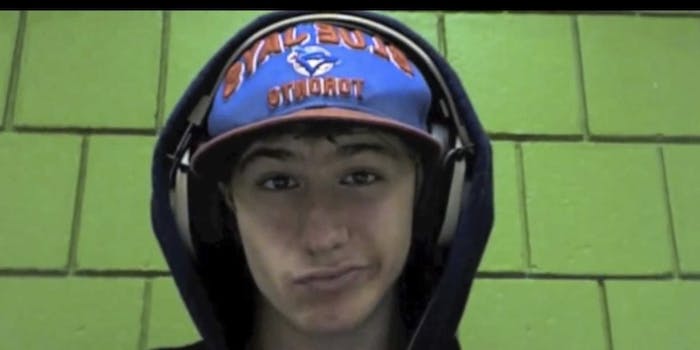 A grand jury voted not to indict 18-year-old Cam D'Ambrosio over rap lyrics he posted to Facebook in the wake of the Boston Marathon bombing.

A grand jury has decided that high schooler Cameron D’Ambrosio is just a terrible Internet rapper, not a terrorist.

That’s good news for the Massachusetts teenager, who spent more than a month in jail for alleged “terroristic threats” he made on Facebook. Instead, the jury found, status updates like:

“fuck a boston bombinb [sic] wait til u see the shit I do, I’ma be famous for rapping, and beat every murder charge that comes across me.”

were merely boastful musical hyperboles, not promises to commit acts of terrorism that would rival April’s Boston Marathon bombings.

Methuen, Mass. police posted on Blogspot May 1 that they had arrested D’Ambrosio for “Facebook phone message[…]with disturbing verbiage.”

D’Ambrosio then spent more than a month in jail. Several courts refused to dismiss his charges, which could have meant up to 20 years in prison.

An online petition by activist group Fight For the Future, which condemned D’Ambrosio’s charges as a violation of the First Amendment, reached more than 90,000 signatures.

Evan Greer, a spokesperson for Fight For the Future, welcomed the news of D’Ambrosio’s release but still expressed concern. “While today is a major victory for Cam, the chilling effect that this case has already had on free speech cannot be undone,” she said.