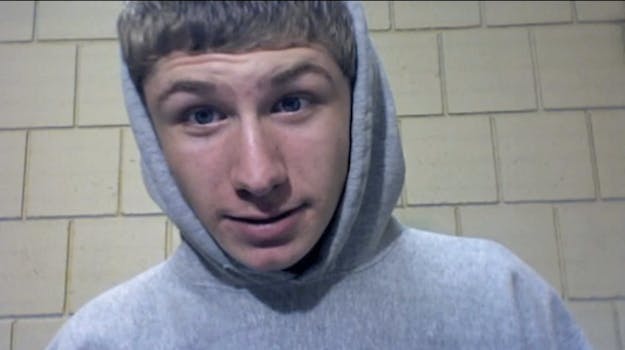 The high schooler and terrible rapper from a Boston suburb whose violent rhymes and Facebook posts got him locked up on terrorism charges is still being held without bail.

That’s a problem, according to the 60,000 who’ve signed a petition arguing that what 18-year-old Cameron “CammyDee” D’Ambrosio said is protected free speech.

In a bail hearing Thursday, D’Ambrosio’s lawyer argued that police overreacted in arresting D’Ambrosio for alleged terrorist threats on May 2, in the wake of the Boston Marathon bombings. He faces up to 20 years in prison.

Methuen, Mass. Police Chief Joseph Solomon, in a statement at the time of D’ambrosio’s arrest, quoted a Facebook status the teen allegedly posted:

“(Expletive) the Boston bombing, wait til you see what I do. I’m going to be famous”

At the time, Solomon explained the post as D’Ambrosio “telling people to shut up and in order to get some props he’ll have to go kill somebody. He says he’ll go insane and make the news.”

“And he said people shouldn’t cry when they see what he does because they have it coming,” Solomon added.

However, according to the Boston Herald, the chief actually tweaked the quote, leaving off a crucial word:

“(Expletive) a boston bominb wait till u see the (expletive) I do, I’ma be famous rapping.”

Activists at Fight for the Future argue that Solomon’s misquote, which was widely reported by the media—including the Daily Dot—entirely changed the context of D’Ambrosio’s words.

According to Evan Greer, the Fight for the Future representative who attended the hearing, other arguments against D’Ambrosio also seemed to fall apart.

Part of police’s concern with him was that his sister once called them because she and her brother got in a fight. She was in the courtroom to support D’Ambrosio Thursday, and his lawyer said she wanted to testify on his behalf. And at a previous hearing, police admitted they hadn’t found any weapons or other proof that D’Ambrosio intended to commit violence.

A judge is expected to rule in the next few days on whether to let D’Ambrosio out on bail.