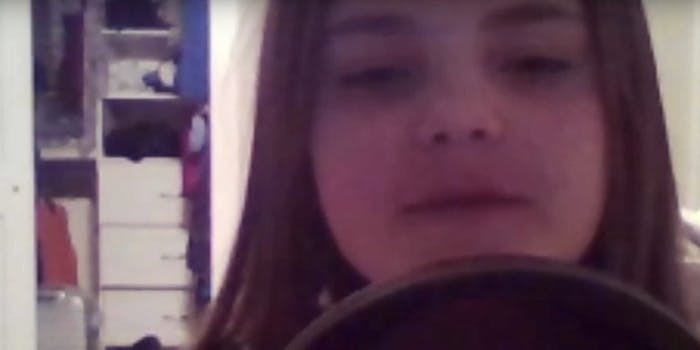 This sweary, savvy, 11-year-old gamer girl is the future of YouTube

LtCorbis is the smartest, funniest new video game streamer on YouTube, snapping off sharp, witty commentary about streaming-channel culture and the Internet over gameplay footage from Call of Duty and Counter-Strike.

Corbis also talks about what it’s like to be in fifth grade, because she’s an 11-year-old girl.

Corbis’ commentary style parodies YouTube’s most popular talking-over-first-person-shooter streamer, LeafyIsHere—she even does Counter Strike: Global Offensive “surfing” footage, which is his trademark. But her commentary is a lot funnier, partly because she’s a kid who says “fuck” a  lot and tells you about the totally wack middle-school orientation assembly she just had to sit through.

Corbis came to the Internet’s attention this week when noted commentarian and human meme Pyrocynical (who is sometimes decried as a Leafy clone with a British accent, but is actually just funny in a different way) gave her a shoutout in a new video.

“An 11-year-old girl has literally made a commentary on how to be original on YouTube. You know, the worst thing is it’s actually really fucking good!” he said. “This girl has embraced the memes, she actually knows what she’s talking about… she literally boiled down YouTube better than middle-aged men do.”

And it’s true. She knows her source material really well and can rattle off a list of six YouTubers whose styles she’s incorporated into her own hybrid channel. She makes observations like, “When you’re a YouTuber, you require another source of something interesting going on for you to leech off of and make your own entertaining content.”

She even made an entire video joking about the meme of calling every commentary channel a “Leafy clone.” It is amazing:

Gamers are eating it up. People who found her channel through Pyrocynical have said that it’s better than his. There’s fan art on Twitter. There’s a subreddit. Corbis has gone from 300 subscribers to tens of thousands overnight.

But it gets better: A swearing, burping tween girl isn’t just the future of gaming commentary. She’s probably the future of all Internet media, or something.

Case in point: You could read about the controversy around a BuzzFeed Canada editor who was harassed on Twitter after seeking non-white, non-male applicants for a job opening, or you could hear about it from Corbis while she plays CoD: Advanced Warfare.

A joke, maybe. But maybe not. It’s already clear that we’re heading toward an Internet where most of what we consume is video, and our Facebook overlords want us to get there even faster. Plus, gaming streams are growing. Amazon.com paid nearly a billion dollars for Twitch.tv, the Internet’s premier game-streaming hub.

Why wouldn’t we also get our media commentary from a shitposting kid who can’t stop laughing while breaking down BuzzFeed’s content strategy (“articles for idiots”). Her understanding of the dynamics of Web celebrity and controversy is more sophisticated than that of many adults who do this stuff for a living.

Granted, her gloss on the BuzzFeed Canada incident is a little bit #NotAllMen, but her explanation of how these things play out is—blessedly—much more nuanced than what you’ll hear from your typical Men’s Rights Activist or Gamergater on Twitter.