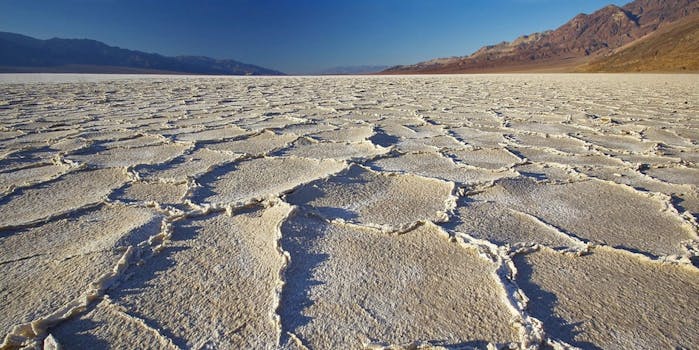 Photo via Fikret Onal/Flickr (CC BY 2.0)

California is facing the worst drought the region has experienced in approximately 1,200 years, according to tree ring data. As a major contributor to the national and global economy, a significant agricultural provider, and the most populous state in the union, California represents a critical asset for the U.S., and so, by extension, does its water supply. At Wired, Nick Stockton floated the hypothetical idea of buying water from Alaska—not a new plan, but one that might seem appealing in the midst of a water crisis.

However, any proposals to purchase Alaskan water resources shouldn’t be taken seriously, as the proposal is functionally impossible, environmentally unsound, and extremely costly to implement. California is going to need to develop other ways to resolve its water shortage issues, and a pipeline that could extend as much as 2,000 miles definitely isn’t the solution.

Water levels in California are definitely dire. The state isn’t getting as much rain as it’s used to; among other reasons, the polar vortexes devastating the East Coast are redirecting the state’s rain. Snowpack is on the decline, and water usage has drained the state’s aquifers by an estimated 20 feet on average, and sometimes much more in regions like the San Joaquin Valley. Stark images of dried lakes and rivers across the state are a compelling testimony to the serious nature of the problem, and the state’s recent spurts of rain haven’t even scratched the surface when it comes to recharging underground water supplies and restoring snowpack.

At the National Journal, Claire Foran notes that in at least one respect, California has returned to the “Wild West,” with water theft a growing problem across the state’s counties. “Rural communities where residents rely on well water and areas of the state that play host to agricultural operations and illegal marijuana cultivation have been particularly hard hit,” she writes, adding that water thieves have become so reckless that they’re stealing from fire agencies in the height of fire season. In 2013, rustlers even stole water from an elementary school.

It’s an issue that doesn’t just matter to California. The state is the eighth largest economy in the world, and in 2009, its agricultural industry accounted for nine of the top 10 producing counties in the United States. In 2012, 11.3 percent of cash farm receipts in the U.S. went to California, and while farming only accounts for around two percent of California’s economy, it sucks up an estimated 80 percent of the state’s water—10 percent alone goes to almonds—and represents a huge drain on other state resources.

But the agricultural industry pays off. A huge percentage of American food products are grown and raised in California, including fruits, nuts, dairy, and vegetables. Ninety-nine percent of America’s artichokes, for example, originate in California, and the state’s allegedly happy cows produce approximately a fifth of the nation’s dairy. The state also employs more agricultural workers overall than any other in the nation, most in the highly fertile Central Valley. And thanks to its unique climate and soil conditions, produce yields are higher in California than anywhere else in the nation—farmers get more bang for their buck in the golden state.

A collapse of California’s agricultural industry would have a tremendous ripple effect across the state and the nation. In the short term, “specialty foods” could increase in price by five to 10 percent, reflecting both shortages and higher water prices that farmers must pass on to consumers, but prolonged water shortages could lead to escalating costs for basic produce. This would hit low-income Americans particularly hard, as they tend to be the first to cut produce out of their diets when costs rise.

Farm jobs in the state would also decline; California farmers are already tearing out the almond orchards they planted not so long ago to meet the demands of the nut boom, for example, which means less of a need for farm workers. An uptick in unemployment would put stress on the state’s welfare and social programs in addition to its economy; unemployed workers cannot afford to spend as much money, and will cut their budgets where possible—including, of course, on food.

Alleviating the water shortage is a pressing issue for the state, which is why a second look at the Alaska plan can make for interesting speculation—but state officials aren’t taking it seriously.

In the late 1980s, Alaska Governor Walley Hickel proposed a plan to run a series of massive pipelines down the continental shelf, enabling the state to sell water to California. His suggestion relied on river overrun, supplies of fresh water that normally end up dumped at sea—the state might as well sell excess rather than letting it go to waste—and these supplies are growing astronomically due to glacial melting. Another harebrained scheme from the same era proposed floating water down the coast in giant nylon bags.

By then, the state was already experiencing drought conditions, though they were by no means as serious as those today. The thought of purchasing water from Alaska might have seemed momentarily appealing to at least some, but there were a considerable number of obstacles aside from the sheer ludicrousness of the proposals.

Setting aside options for bringing water down in tanker ships or bagging it, officials estimated that the proposed pipeline would cost approximately $11 billion over 15 years, and that was a conservative guess. Massive projects of this nature tend to run significantly over budget and over time; had the states begun construction in 1994, when the theory was still periodically getting media airtime, there’s a slim chance Californians might have been drinking Alaska’s finest by the time Taylor Swift released 1989, after the usual delays in construction. A pipeline certainly wouldn’t fix California’s immediate drought worries.

It’s not just cost that represents a significant problem, though. The proposed pipeline could damage Alaska’s environment: While the water may be readily available, the state’s salmon and other fish rely on carefully balanced fisheries. Taking water from the state’s rivers could be a particular problem for salmon hatcheries and migration, potentially harming Alaska’s economy.

California is also facing a huge budget deficit under Governor Gerry Brown. While the state appears to be in economic recovery, Brown’s proposals for managing deferred maintenance, addressing social services shortfalls, and repaying debt will result in overall deficit increases—and that’s before the state starts buying water from Alaska. The state already maintains the largest deficit in America, and increasing it would radically increase the risk of default.

The state has better options for managing its drought, starting with a fundamental reevaluation of how it uses water. Given historical trends, it’s clear that water shortages are not likely to end in the near future, so the state must start utilizing resources differently, with crackdowns on water use, better oversight of underground water supplies, and tough discussions about urban areas like Los Angeles that use disproportionate amounts of water.

Additionally, California needs to put Silicon Valley to work by exploring technologies that will help it reduce water usage and access new supplies; the short-term expense is worth the long-term benefits. Tech innovations like water-saving irrigation technologies, low-flow toilets, and mandates for low-water landscaping can cut usage, while options like desalination and graywater recycling as well as treated sewage, already used on nonedible landscaping in areas like highway medians, will increase available water supplies.

The state is looking at an unfamiliar landscape, unlike that which encouraged Europeans to settle in the region hundreds of years ago, when it appeared appealingly green and lush. If it can’t adapt, it will wither on the vine—and the United States will pay a heavy price, as will the state’s nearly 40 million residents.

Photo via Fikret Onal/Flickr (CC BY 2.0)