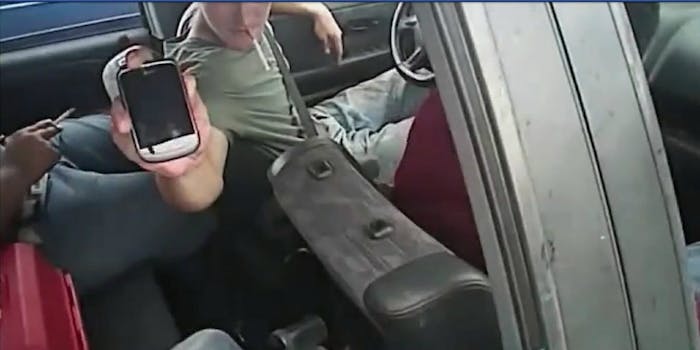 "Butt-dialing 911 is a hazardous nuisance."

Butt-dialing can be a problem for anybody who has to be on the receiving of such a telephone call, but it’s probably ultra-annoying for a 911 dispatcher, particularly because it seems to happens with alarming frequency.

Sometimes, though, butt-dialing can actually help police do their jobs.

Such was the case this week with the Aransas, Texas, police department when an accidental 911 call led police to a car in which three passengers had arrest warrants out. The responding officer then arrested all three.

The video below, via the Aransas police department, tells the tale.

This isn’t the first time a pocket dial has gotten the dialer in trouble. It’s happened in Roswell, New Mexico, in New Jersey, in Oregon, and in Washington. In fact, the Salt Lake Deseret News reported in 2012 that one call center averaged more than 60 accidental dials per day.

Should you find that you’ve accidentally contacted emergency services, a Utah emergency call center spokeswoman advised the following: “If you accidentally dial 911, stay on the line. ‘Hey sorry, just put my phone away.’ We’ve all done pocket dials, not necessarily to 911. Stay on the line so we can try and verify that and we don’t have to track you down.”

Here’s what you should not do: Talk about your arrest warrants, or the robbery you just pulled, or the car you’re about to steal. As the Aransas PD wrote: “Butt-dialing 911 is a hazardous nuisance. Hazardous to the one who received a 12 year prison sentence, and a nuisance to our 911 communications division.”

I have to suggest a conspiracy theory, however. The driver was the one who butt-dialed. He also was the only one of the four not arrested. He either wanted to ride solo so he could listen to his music without any distractions or he was tired of his cohorts not chipping in for gas money. Thus the supposedly accidental pocket dial, which eventually led to the driver getting some alone time. Which is pretty much what all of us want anyway.