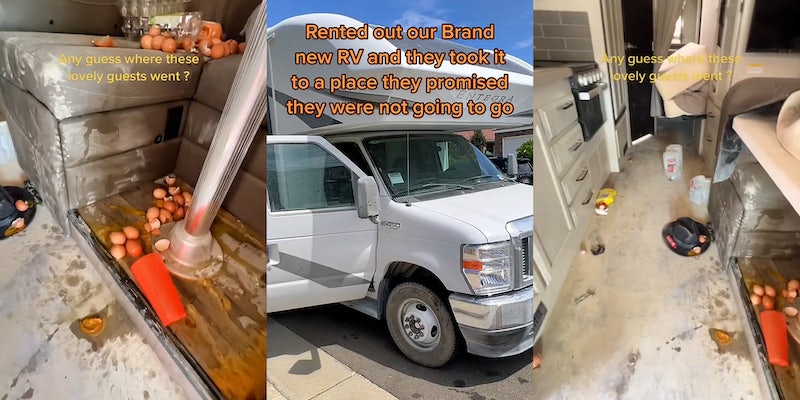 ‘He bluntly lied and took it to the only place we had restricted’: TikToker says renters trashed their RV and lied about going to Burning Man

'Sorry not sure what burning man is, not going to any kind of festival.'

A group allegedly lied about their intentions for renting an RV, according to a viral TikTok video. When they returned the brand new vehicle, it was completely destroyed from the guests’ trip to Burning Man, a nine-day festival in the Nevada desert, famous for its intense camping conditions and regular dust storms.

The man they rented from, @mrloanofficer, took to his TikTok account to expose the burners and show off the destruction. His videos about the ordeal have racked up over 13 million views.

In the first video, @mrloanoffficer shows the RV how it was returned. The interior is covered in a thick coat of dirt, there’s trash spilled everywhere, and an enormous carton of eggs has spilled and cracked open on the floor.

In another video’s shocking reveal, he shows the vehicle completely scrubbed clean. Every surface is rendered brand new and fresh carpet sits where the pile of egg yolks once was.

@mrloanofficer She’s back and ready to set sail after a few other repairs that need to be made, but aesthetically, she’s looking great. Amazing wash. Still slight egg smell 🤢though #rv #rvlife #disrespect #decenthumanbeing #nolove #rvfail #rvdetail #rvwashed ♬ Get You The Moon – Kina

@mrloanofficer explains that he had high hopes for the campers when they first met. He did a walk-through with them, and his wife offered the guests tips on RV living.

“We actually gave him a bottle of champagne,” he says in another video.

@mrloanofficer Sorry it’s been a long week. Posting updates as I get them. Promise the details we are looking for are coming, just need to finalize the repairs to figure out the numbers. #rv #rvlife #disrespect #liar #burningman2022 #burningman #update ♬ Lonely Day – System Of A Down

He claims the couple told him the RV would be used for a trip to Yosemite National Park. They never expected the Burning Man disaster when it was returned.

“Some people straight up lied to us straight to our face,” @mrloanofficer told his followers. He noted in the caption that Burning Man was the only place they had restricted for the RV rental.

“Evidence that was found along with other details I can’t share yet, he bluntly lied and took it to the only place we had restricted due to the issues that place can cause,” he wrote.

He even shared screenshots of alleged messages with the renters, in which they claim to not even know what Burning Man is.

@mrloanofficer Replying to @dillydilly530 Evidence that was found along with other details I can’t share yet, he bluntly lied and took it to the only place we had restricted due to the issues that place can cause #disrespectful #rv #rvlife #disgusting #humandecency #raisedright #rvlife #burningman #burningman2022 ♬ Fallen down – Slowed – 「Incørrect」

Many TikTokers were furious and argued that @mrloanofficer should sue the Burning Man RV crew.

“You need to take them to court,” one user commented.

“In the process,” @mrloanofficer responded.

The Daily Dot reached out to @mrloanofficer via TikTok comment and email.