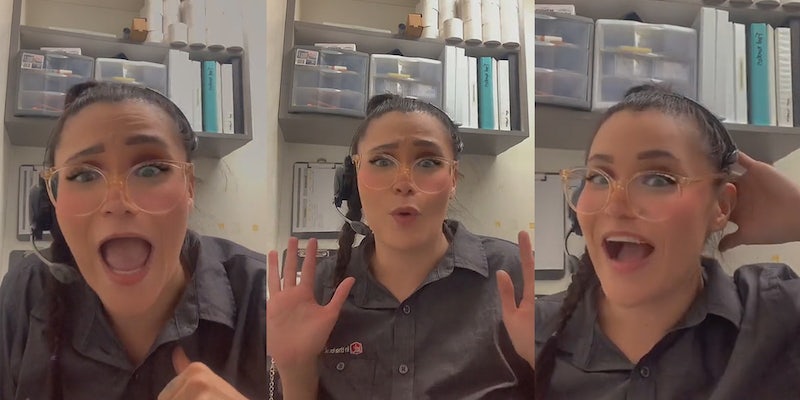 ‘And that’s how I ended up at Jack in the Box’: Former Burlington worker says she was fired, arrested after giving out discounts to friends, family

'Everyone there gave their discount to their family.'

An ex-Burlington employee says she was fired and arrested for handing out too many discount coupons to her friends and family.

TikTok creator Crystalino (@crystalino.xo), hopped on the “One Thing About Me” TikTok trend of telling a fun story of fact about yourself to the beat of Nicki Minaj’s “Super Freak.” Crystalino’s story happens to be about how she ended up working at Jack in the Box with a criminal record.

“One thing about me is that I used to work at Burlington,” Crystalino, who has nearly 60,000 followers, starts off. In the video, she’s at work and appears to be taking Jack in the Box orders over her headset, while telling her story to the camera at the same time.

Crystalino says that, like all her other colleagues, she would give discounts to her friends and family who shopped at Burlington. But she says one day she was called into the office, and a man from the company’s loss prevention department asked her how long she had been “stealing.”

The California native notes she was taken aback and asked for proof, which was shown in the form a video featuring “the back of [her] head and a whole bunch of receipts.” Crystalino says that until then, she had never even been in trouble before and started to cry. She says the situation got even worse when she was made to strip and change into a blue jumpsuit. Her glasses and hair tie were also taken away since they were considered potentially dangerous objects, she says.

She goes on to explain that she had to get a lawyer and even had to call her mom to explain why Burlington had fired her and that she had been arrested for giving away discounts. However, Crystalino says her mom didn’t bail her daughter out to teach her a lesson.

The TikToker also tells the audience about her experience with a woman in the prison named “Windows.” Crystalino says she was crying when the tattooed woman “sniffed me” and wiped away her tears. The TikToker says that from her knowledge of the show, Orange Is the New Black, it became apparent to her that she was Windows’ “bitch.” She also recounts how another inmate named “Lady Suge” beat up another woman so that Crystalino could sit next to her.

It’s at this point that Cystalino suddenly answers her headset and says, “Hi, good morning, what can we get for you?” But she’s also not done with the story. She says her mom finally bailed her out but that her dad wouldn’t speak to her, and no one would hire her because her arrest kept showing up on her background checks. She also continues to take orders from the drive-thru while telling the camera these last details, asking “With what to drink?” in between explaining the fallout from when she left jail.

“And that’s how I ended up at Jack in the Box,” she concludes.

Although she clarifies that the incident took place six years ago, the TikToker’s video has been viewed over 348,000 times since being posted on Sept. 27.

It received several comments from viewers who were amused by the story. Several called out Crystalino’s mom for wanting to teach her daughter a lesson when, presumably, she had been enjoying the benefits of the Burlington discounts all along. “Not your mom trying to teach you a lesson while taking your discounts,” one person said.

Viewers who had experience working at Burlington also jumped in, with one person saying that the same thing happened to her. “I got fired for stealing when literally everyone there gave [their] discount to [their] family,” she said. One viewer asked Crystalino to clarify whether she had been arrested for stealing or giving away discounts, and another said, “That’s what I’m wondering.. I worked there for a few years and family & friends were allowed discounts.” Another viewer who had experience working at Burlington clarified that only spouses and children of employees can use the employee discount.

A few viewers also commented on Crystalino’s ability to tell her story while taking orders from the drive-thru. “I love how you multi-task at the end,” one person said. “What did they want to drink tho?” another asked, to which Crystalino replied, “Orange juice!”

The Daily Dot reached out to Crystalino via email and TikTok comment.