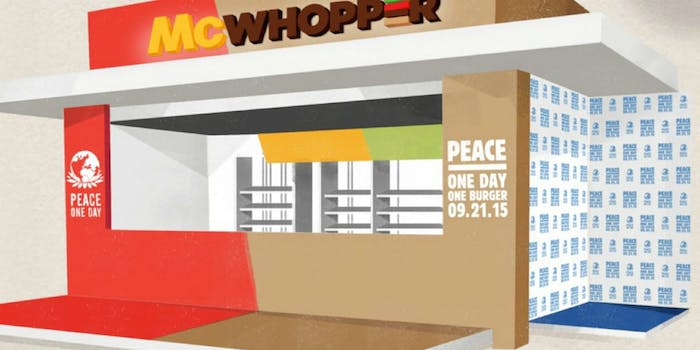 But that's just the beginning.

McDonald’s and Burger King are in talks to team up to produce a burger that will either horrify or delight you in the most caveman of ways. The Chimera-like creation? A McWhopper, a combination of the McDonald’s Big Mac and Burger King’s Whopper.

As Time magazine writes, Burger King ran full-page advertisements in the New York Times and Chicago Tribune on Wednesday, proposing the new mega-burger that would only be served for one day in one city.

Here’s the ad, via BurgerBusiness: 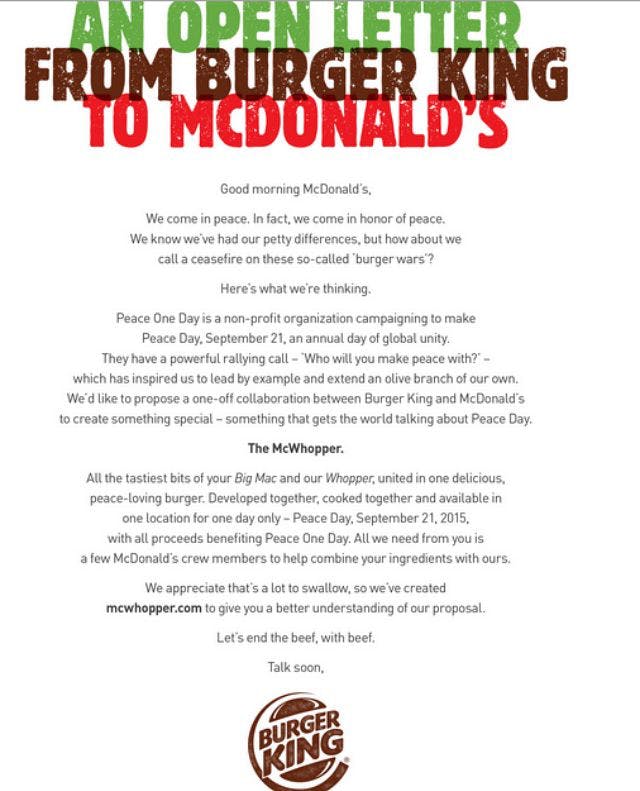 According to the official McWhopper proposal, Burger King suggests the two companies hoist the burger upon the public for one day  in Atlanta—a meeting point between Burger King’s Miami headquarters and the main McDonald’s office in Chicago

Here’s how some of the packaging could look.

And here’s how the ingredients could be mashed together.

As for McDonald’s response.

But Burger King’s proposal got us thinking. What other fast food combinations could we propose that would make the tummy rumble? Here are five daydreams that hopefully one day could become a reality. Even if all these products aren’t available, that doesn’t mean our dream of fast-food harmony can’t live on inside our darkest fantasies.

What could be better than two beef patties, two slices of cheese, and a never-ending avalanche of bacon stuffed into a “warm, pillowy” flatbread alongside more beef, sour cream, lettuce, even more cheese, and diced tomatoes? Splash on some hot sauce, and you’re good to go for the rest of your life.

I’ve never consumed an entire McRib, and I’m almost positive that it’s one of the most hideous sandwiches one could fathom. But that doesn’t mean the meat product wouldn’t fare brilliantly if it’s mixed with vanilla soft-serve ice cream. Maybe throw in some crumbled Oreos to make the dessert that much more delicious.

For those who are trying to cut back on their meat consumption—but certainly not on their cholesterol intake—how about In-N-Out’s famously-mediocre fries that are slathered in cheese, secret sauce, and grilled onions and then place the egg and cheese biscuit directly on top of it? In order to avoid a mess—because, let’s remember, you’re trying to be as dainty as possible—use a plastic knife and fork to transfer this goodness from the table into your gullet. This might be the most perfect breakfast ever created.

Because who wouldn’t want roast beef and cheese added to their pasta?

You might not agree with any of these suggestions, but there’s one thing of which we can be certain. As Burger King wrote in its letter to McDonald’s, we should end all beefs with beef.

I just wish there was a true way to make this video a reality.