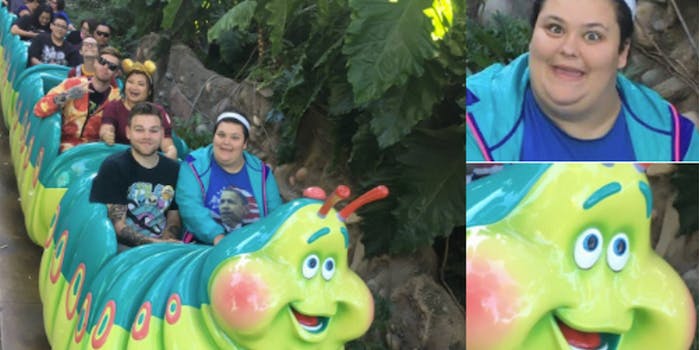 Woman realizes she looks just like this kiddie Disneyland ride

There’s nothing particularly memorable about the Heimlich Chew Chew Train at Disneyland. It’s a slow ride, meant for preschoolers, where the Bug’s Life character talks about his favorite food.

But then this happened.

Christine Sydelko shared that photo on Sunday, and the internet has been :crying joy emoji: ever since.

“It’s one of my favorite rides because it’s so slow and he talks in a funny German accent,” Sydelko told BuzzFeed. “I immediately thought I looked like the ride, especially because my jacket was the same color blue and I was making the same face.”

Sydelko basically willed herself into a meme.

shit I can't tell which one is the original but I photoshopped one of these pic.twitter.com/2ESSEP69fe

The post really took on a life of its own. One girl tagged herself in the ride. And others tracked down the tattooed dude one row back on the ride.

For her part, Sydelko seemed to take the whole thing in stride; she even shared one of the better remixes someone made.

That’s par for the course, though. Sydelko’s ferocious self-deprecating humor has made her a favorite on Vine, where she has had nearly 500 million loops to date. Do yourself a favor and start following her today.