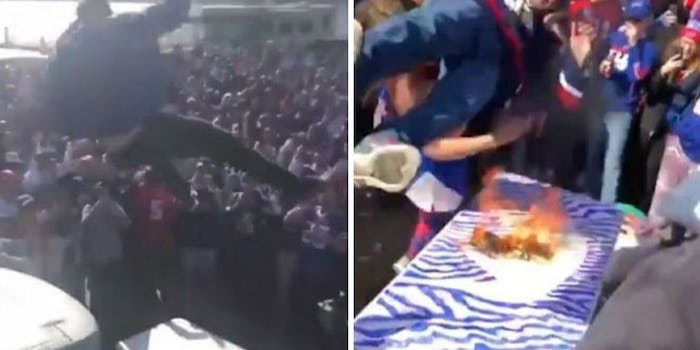 In which fans are slammed through flaming tables.

But before the team’s playoff game vs. the Jacksonville Jaguars on Sunday—the first time Buffalo has been in the postseason since 1999—the fans, known as the Bills Mafia, took it to a different level. Basically, they went freakin’ bananas. Take note: the game isn’t even being played in Buffalo.

Here’s a sampling of all the shenanigans.

Oklahoma drills in the lot @barstoolsports

The definitive compilation of today's #BillsMafia videos you need: pic.twitter.com/QDQi6Oi2nO

Not even NFL analyst Bill Cowher, the former Steelers coach, could stop himself from getting involved.

Bill Cowher just became on honorary member of the #BillsMafia by breaking a table on CBS. pic.twitter.com/lH1nOvXZG1

Usually, an NFL team doesn’t need extra motivation before taking the field before a playoff game on the road. But something is wrong if the Bills can’t draw an extra smidge of inspiration after watching their fans go nuts in their honor.