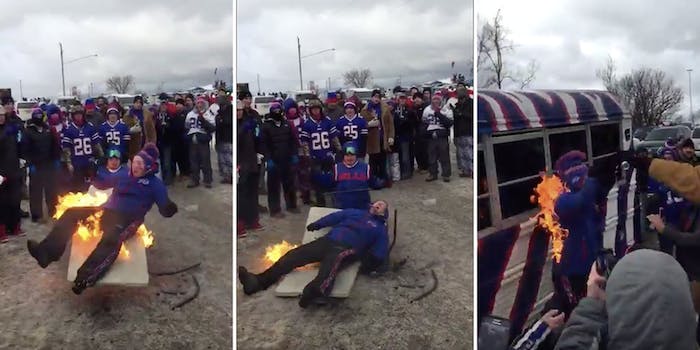 The #BillsMafia doesn't mess around.

The once-mighty Buffalo Bills haven’t been the same since the days of Jim Kelly and the three consecutive Super Bowls in the 1990s. Sure, they lost those championships, but they made it to them, and that’s half the battle. The Bills have since fallen from the NFL leaderboard; for the second year in a row, they failed to make the 2015 playoffs.

Finishing out this year with an 8-8 record, the Bills reportedly failed to add to their previous season’s wins, instead subtracting one. (They were 9-7 in 2014.) But on Sunday, not content to sit out the playoffs alone, they beat the New York Jets, forcing that team to join them on the bench for the postseason.

According to Deadspin, the wildest of Bills fans, the #BillsMafia, throw the rowdiest, most insane tailgate parties, filled with booze, loud “Woo!”ing, and plenty of broken tables. And to one Buffalo fan in particular, Sunday’s win was bigger than the Vince Lombardi trophy, the white whale to the Bills’ Ahab.

This dude does not give a fuck that he’s on fire. He jumps into the flames not once, but twice, to the roars of the crowd. He marinates in their cheers and applause. The playoffs don’t matter to the #BillsMafia—and safety matters even less.

The #BillsMafia doesn’t mess around.