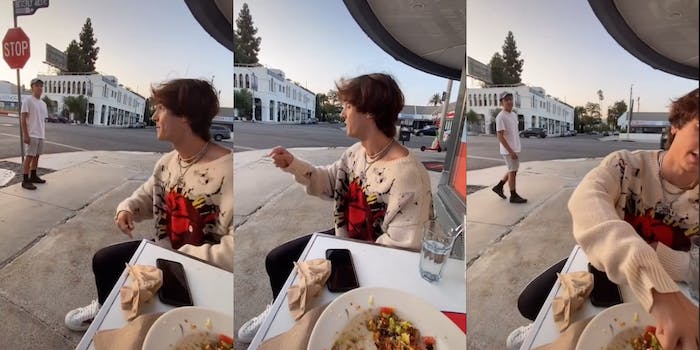 “If you come past this line—six feet—I’m going to knock you the f*ck out."

The footage, posted by @celebcringe on TikTok, shows part of an interaction between Hall and the fan in which Hall tells the boy he’d fight him if he came close. The 21-year-old, who has about 21 million followers on TikTok, once claimed he’d been in “over 40 street fights” before losing to Austin McBroom in the “TikTokers vs YouTubers” boxing match.

Hall appears to be in the middle of eating a meal outside a restaurant but was interrupted by the stranger. It’s unclear what prompted him to yell at the teen before the recording began. The TikTok has since amassed 3.2 million views.

Hall told the teen if he came near him, he’d feel threatened, especially “with covid being a thing.” He went on to say that it would be a threat, and he’d send the video footage to his lawyer.

“If you come past this line—six feet—I’m going to knock you the fuck out,” Hall said. “It’s self defense.”

The teen said he didn’t know why Hall was getting so mad and said he was just a 16-year-old.

Hall can be seen laughing in a sarcastic manner before the footage cuts off.

On Twitter, Hall shared the footage with a plug for his website. It’s unclear if the video was staged, since it appeared to be taken by Hall’s companion and Hall made a joke about it.

Regardless, viewers on TikTok were upset at Hall’s supposed tirade.

“Not Bryce becoming a Karen,” one user commented with a laughing emoji.

Some viewers pointed out Hall’s interest in fighting.

“These are the street fights he be talking about,” one user said.

Several folks pointed out Hall’s visibly trembling hand as he ate his nachos.

Hall did not respond to the Daily Dot’s request for comment.