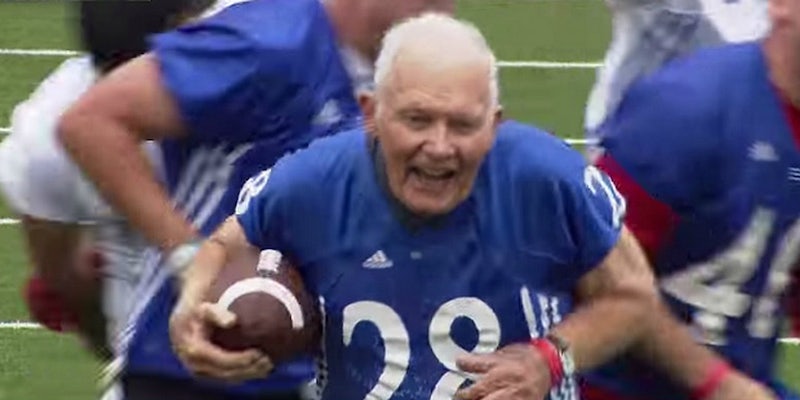 Meet Bryan Sperry, a college football star... from 70 years ago.

If you want to see something adorable occur during a college football game, springtime is usually the season for such shenanigans. Usually, it’s little kids scoring touchdowns against big-name and big-time college athletes (see here and here for two prime examples). Rarely, do we get to see a World War II veteran show off his moves.

Yet, that’s exactly what happened at the University of Kansas spring alumni game.

Let us introduce you to 89-year-old Bryan Sperry, a former Jayhawks player who rumbled and rambled and rammed it in for a long TD last Saturday. Check it out.

My analysis: Heck of a lateral catch from Sperry, who showed solid footwork to make it around the defenders and all the way to the end zone. Also, a big credit must go out to his blockers, who absolutely dominated the defense on this play (it almost looked like the defense was too intimidated to try hard).

A little background on the hero (figuratively and literally) from the Kansas City Star:

Sperry was 17 years old when he first left home to play football at Kansas State. He was 19 when he served as an infantryman in the Battle of the Bulge, the large and bloody battle in the final years of World War II. Three years later, in his early 20s, he was hauling in a pass for Kansas in the 1948 Orange Bowl.

If that sounds like quite a life, well, yes, that’s true. It’s been close to 70 years since Sperry suited up for a college football game …

In the months after the war ended, Sperry says, he wished to return home to Kansas and finish college. But the process of returning soldiers home by boat took months, so the military sent Sperry to a university in England to wait. While there, he says, he played 13 games for the school’s football team, a mix of professionals and college players and high school graduates with limited football experience.

When he returned to the U.S., Sperry tried out for the Jayhawks squad—despite having previously competed for Kansas’ rival, Kansas State—and eventually, he played three more years, including on the 1947 Orange Bowl team.

The next time he took the field apparently was Saturday. And he looked awesome doing it.

“That was fun,” Sperry told the newspaper. “I didn’t know if I could run.”

If only all of us could be that spry at nearly 90 years old, what a wonderful world it would be.