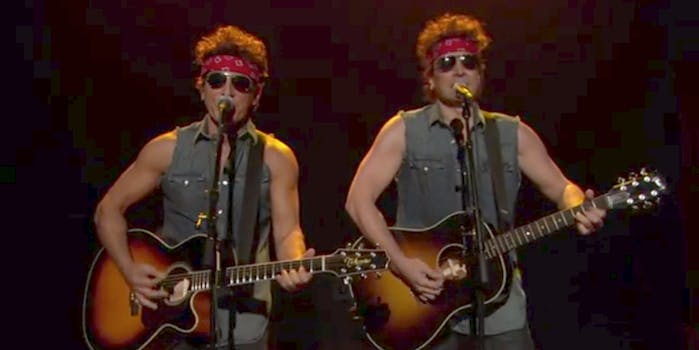 That's gotta hurt for Christie, a diehard Springsteen fan who's been to at least 130 of his shows.

The late-night talk show pundits have had a field day since news came out that members of N.J. Gov. Chris Christie’s staff caused a traffic jam on the George Washington Bridge last year, but the biggest blow to the governor so far came from the very man (and Boss) he idolizes.

Bruce Springsteen appeared on Late Night With Jimmy Fallon to promote his new album, and the duo reworked one of Springsteen’s most famous songs into a crash course on New Jersey’s latest political scandal.

No, it wasn’t called “Blunder Road.”

Christie is a diehard Springsteen fan who has been to at least 130 concerts and reportedly cried after Springsteen hugged him after a concert. Springsteen, however, distances himself from Christie due to their different political views, but has mostly kept things civil.

With his guitar in hand, he called the traffic jam “longer than one of my own damn shows” and both he and Fallon said he was “killing the working man.”

Now that Christie himself is the subject of a federal investigation over the use of Hurricane Sandy relief funds, he probably didn’t appreciate the latest takedown from the Boss—but at least it wasn’t another attack on his weight.