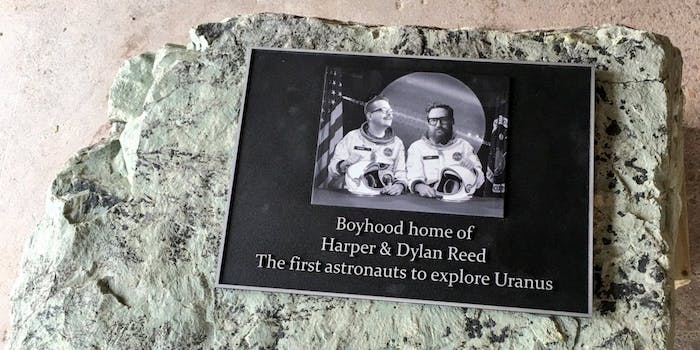 What a daring duo.

If there’s one way to celebrate your non-existent accomplishments, installing a plaque on a rock at your parents’ house is it.

Brothers Harper and Dylan Reed went for a classic space joke: Uranus. But instead of just tricking someone into saying the planet’s unfortunate name, they really knocked it out of the solar system. They have dubbed themselves the first astronauts to explore the gas giant and gifted their parents with a special rock that will forever commemorate the brothers’ harrowing mission.

Earlier today my brother, @dylanreed, and I installed a monument in our parents front yard.

This is the monument before we installed it pic.twitter.com/Q4fFVii8dT

It looked like no easy feat. They had to transport the rock with a moving truck and use a chain harness to position the monument in their parents’ front yard.

My brother helped deliver it pic.twitter.com/ke7Fb3kvnh

Putting it in the yard pic.twitter.com/isQuhyKQKG

Was it worth all this work? Uh, hell yeah. Imagine all the neighbors coming up to read the plaque only to be trolled by this piece of art.

We wish the Harper brothers good luck on their future space explorations.