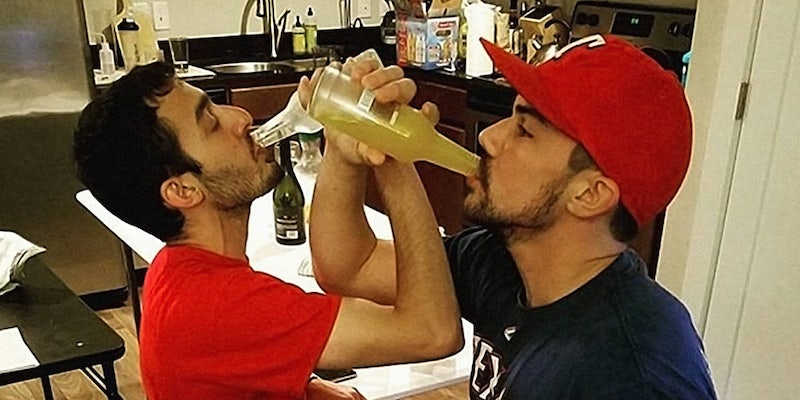 Seven years after its heyday, Bros Icing Bros is poised for a comeback

Is icing coming back?

The eternal struggle of the bro is to find ever fresher, more amusing ways to prank his fellow bros. If that can be accomplished while also finding a way to get a buzz on, all the better.

For this reason and others, Bros Icing Bros may have been among the most bro-ish mainstream trends to ever exist. For a few months in the spring of 2010, it took the world by storm. Sure, the vast majority of the people who actually took part in icing rituals were bros themselves—or at the very least other men who did it ironically despite having bro-tendencies—but it was still talked about endlessly and so popular that some thought it was a guerilla marketing tactic.

Since it’s been nearly a decade since its peak, perhaps a refresher is needed. Yes, there is an explainer video.

Icing works like this: one bro presents another with a Smirnoff Ice. If the one on the receiving end of the Ice does not have their own bottle, that bro must take a knee and drink the one he is being presented. If the bro does have a bottle, the bro presenting an Ice must drink both. That’s the gist of it. Of course, there are more elaborate ways to present a fellow bro with an Ice besides merely walking up to him and handing him one, but then you’re getting into advanced tactics.

In some ways, connecting the dots between sudden runaway fad and marketing strategy seems logical. Prior to Bros Icing Bros taking off as a cultural phenomenon, Diageo, the company that owns Smirnoff, had reported declining sales for Smirnoff Ice. At first glance, flavored malt beverage also seems like a curious fit for a bro ritual.

When it was released, Smirnoff Ice was not explicitly labeled as a drink for women, but it was certainly perceived as one. That helps to explain why in 2002 Diageo released a variant specifically aimed at men called Smirnoff Black Ice.

Unfortunately, this gets at one of the problematic elements of icing. Sure, there’s mischievous glee to be had in making your fellow bro chug a malted beer-type beverage at a time he wasn’t expecting it, or perhaps a time it might be inconvenient for him to consume alcohol, but at least some of the humor rests in forcing another man to consume a drink associated with women. Some men, like the one included toward the end of the video posted above, did enjoy drinking their Ices, but were hesitant or even embarrassed to admit it.

A New York Times article published in spring 2010 quotes a student at the University of Central Florida saying fellow men who would never buy Smirnoff Ice were buying it to shield against being iced by other men.

The other problematic matter of icing, of course, is that it promotes binge drinking.

This helps explain why Diageo didn’t wait long to distance itself from the meme. It’s not that men drinking Smirnoff Ice is anything they would be concerned about on its face. Companies ultimately don’t care much who is buying their product so long as units are being moved. The problem is that sales didn’t spike dramatically nationwide, rather mostly in a handful of college towns.

The precise origins of icing are difficult to pin down. Students at colleges throughout the East Coast claim responsibility, though it’s fair to say the trend had its most early concentrated success in the South. The Pi Kappa Alpha fraternity at the College of Charleston claimed to be the first to put the rules online at BroBible.com. However, it was a standalone site, brosicingbros.com, that became the online headquarters for the movement.

Launched on April 5, 2010, the site featured an explanation of the game, as well as particularly creative or outlandish examples of bros being iced. The man behind tit was a then-22-year-old recent college graduate who lived in South Carolina and only identified as Joe in interviews out of concern for jeopardizing future job prospects.

In an interview with Fortune, Joe describes first encountering icing with frat members at Charleston, and his decision to bring the game to his college. It quickly spread through campus, inspiring Joe and his frat brothers to create the website for hosting photos of people icing. At its peak, the site was getting about 100 submissions a day, Joe said. Here is Joe’s definition of a bro: “A bro is a college-age person. They like to hang out. A lot of them drink beer and wear backwards baseball caps. A lot of them drive SUVs and listen to Dave Matthews Band.”

Joe’s site didn’t even make it to three months before being taken down in late June 2010. With Diageo the subject of so much speculation that the brand was responsible for creating the game, the company had to take steps to distance itself from icing, lest it be accused of promoting underage and binge drinking.

“Diageo has taken measures to stop this misuse of its Smirnoff Ice brand and marks, and to make it clear that ‘icing’ does not comply with our marketing code, and was not created or promoted by Diageo, Smirnoff Ice, or anyone associated with Diageo,” the company said in a statement to Ad Age.

Of course, the closure of one website was not enough to completely derail a phenomenon that had already garnered national attention. The icings continued for months and years, with wilder and wilder examples, such as bottles being strapped to the backs of dogs or buried in vats of protein powder to be happened upon by unsuspecting bros.

Celebrities got in on it. Coolio was iced at a concert. Buzz Aldrin reportedly was presented with an Ice, but rejected it, which is a violation of the bro code, which luckily carries zero actual consequences. Iconic wrestler Ric Flair was iced as part of a scripted segment on a TNA show.

The titans of the finance industry, many of whom are successful but bros nonetheless, took part. An icing was reported at Goldman Sachs, as well as at investment bank Raymond James, and hedge fund D.E. Shaw.

In accordance with the lifespan of these sort of things, the juggernaut that is icing petered out within a few months. College Humor posted a video skit riffing on icing in September 2010 with a character mentioning that everyone had stopped doing it two months before. Icing became a dated fad—bound specifically to 2010, just like how we connect Pokemon Go to 2016 and fidget spinners to 2017. Sure, bros might do it for old time’s sake, but icing became just another in an endless array of drinking games.

Yet has icing been away long enough to have a comeback? There are rumblings of an icing resurgence in 2017. Online bro culture destinations such as Total Frat Move and Barstool Sports have featured examples of it happening in recent months.

They really put it in a burrito. #BringBackIcing

One such example shows a bro bring presented with an ice baked into a burrito. That video has been viewed more than 2.4 million times. A Barstool affiliate site at the University of Maryland just this month posted a guide to icing. Could it be? Are college kids embracing icing again?

Bros might want to carry around a bottle just to be safe.