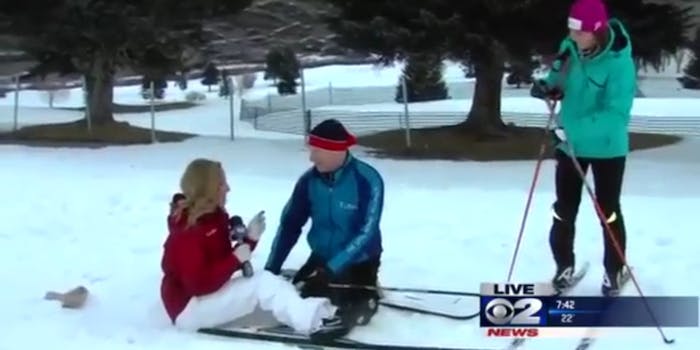 Brooke Graham got knocked down, but she got up again.

When you fall over on live television, it’s all about the recovery. Brooke Graham, a reporter for KUTV 2 News in Utah, discovered this over the weekend.

Graham was introducing a segment on cross-country skiing in Salt Lake City on Saturday, strapped into a pair of skis. You can discern the moment when her voice changes, then she falls backwards into the snow. It’s a graceful dismount, and when she comes to, she continues the interview with two skiers from the ground, after addressing the elephant in the room:

“I just slipped and fell.”

According to KUTV, which reported on their reporter falling over, Graham tried to warn her producer she wasn’t feeling well, and has a history with fainting at high altitudes. But she seems to have a good attitude about her altitude fail. It’s even made her a bit of a minor celebrity:

“[W]e can all laugh at the craziness of the situation,” she told KUTV. “I have laughed many times watching this video so don’t feel bad if it makes you giggle.”