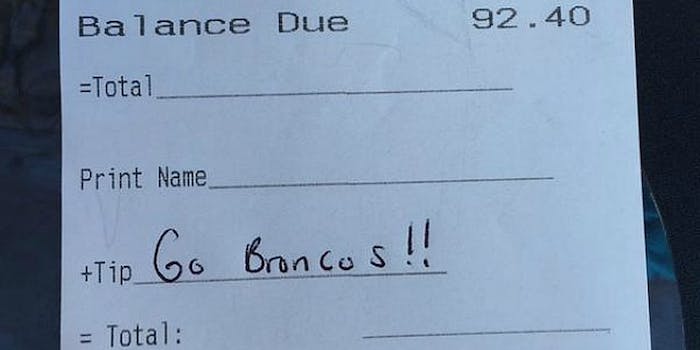 If you happen to be waiting on a table where DeMarcus Ware is sitting, do not say 'Go Redskins.'

Defensive end DeMarcus Ware plays for the Denver Broncos now, but he spent the first nine years of his career with the Dallas Cowboys, one of the Washington Redskins’ biggest rivals. It’s safe to assume the 6-foot-4, 247-pounder probably doesn’t much like the Washington franchise.

So, when Ware was in our nation’s capital last weekend for the White House’s Easter Egg Roll, it seemed like a particularly bad idea that a waiter serving Ware at a restaurant would taunt the eight-time Pro Bowler with a pro-Redskins statement.

Particularly since Ware controlled how much money that waiter would collect in their short-term relationship and then could laugh about it with his nearly 300,000 Twitter followers.

Thus, we present to you the end result.

#ThingsWaitersDontDo
1) Pre-judge
2) Assume
3) Assume u gonna get a tip after you say "Go Skins" pic.twitter.com/mmbHQisdws

Luckily for the waiter, Ware didn’t pull the move once made famous by running back LeSean McCoy. Ware didn’t actually stiff anybody.

To everyone concerned about my last tweet – I was having fun with a fan. I did in fact tip …I have a sense of humor and so did he.

To contrast, I have a restaurant story that involves a player that didn’t have a sense of humor.

I worked as a waiter during my high school years in the Atlanta suburbs, and one Sunday evening, a large group of Falcons fans (maybe 15 or 20 people) entered the establishment and sat at a table in my section. I noticed that most of them were wearing the same jersey number that was temporarily taken by the team’s starting safety, a two-time Pro Bowler who was in the final season of his career.

But I didn’t know what said safety looked like—I didn’t even know he was in the restaurant—and since the Falcons were absolutely horrendous that year, I poked fun at the team even though Atlanta had happened to pick up a rare victory earlier that afternoon.

I realized my mistake when I looked at the credit card slip of the man who paid for the entire meal. I can’t remember the exact size of the tip he provided me, but it was somewhere in the 4-7 percent range. And the man who paid for it was the player whose names were on all those jerseys.

Apparently, this NFL player did not have the same sense of humor that Ware possesses.