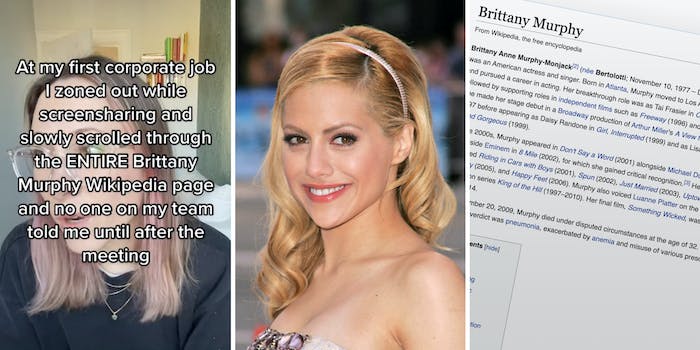 ‘Tbh this isn’t even my most embarrassing work story’: Woman scrolls Brittany Murphy’s entire Wikipedia page while screen-sharing at work

'It's so easy to zone out during endless Zoom meetings.'

Last month, a TikToker went viral for describing a work incident where she was caught accidently scrolling through Brittany Murphy’s “entire” Wikipedia page while screen-sharing. The story drew hundreds of users to its comment section, many sharing similar experiences of doing something cringeworthy while screen-sharing.

The video, which was posted last month and has over 427,000 views, was posted by TikToker Becca Platsky (@nitetoast). Platsky is the co-founder and chief operating officer of Nitetoast, a startup calendar app company which aims to reduce meeting overload, and runs a TikTok account with over 4,000 followers under the company name.

“At my first corporate job I zoned out while screensharing and slowly scrolled through the ENTIRE Brittany Murphy Wikipedia page and no one on my team told me until after the meeting,” Platsky captioned the video. “I like to think we all learned something that day.”

“Tbh this isn’t even my most embarrassing work story,” Platsky commented under the video.

Brittany Murphy was an American actress and singer, known for her roles in Clueless; Girl, Interrupted; Drop Dead Gorgeous; Don’t Say a Word; 8 mile; Uptown Girls; and other film and television shows. Tragically, Murphy died at age 32, with the cause of death—argued to be a combination of pneumonia, prescription drugs, and anemia—being heavily disputed. Murphy’s Wikipedia page details her career, personal life, and death.

“To be honest I don’t know how I ended up on Murphy’s wiki page. It was one of those random things that popped into my head as I was zoning out,” TikToker Platsky told the Daily Dot.

Platsky further explained how the screen-sharing experience went down at work.

“My heart totally sank, my hands got sweaty, face flushed. It was awful. I sent an email to my boss apologizing. Luckily, my team totally laughed it off!” Platsky said.

Many users came to the comments section to discuss the relatable scenario and share their similar work experiences.

“Had to share mine and didn’t realize I had three tabs open researching Botox,” one user commented.

“My manager was screen sharing with the team and pulled up google and her last search was ‘how do you know you are meant to be together forever,’” another user described.

Others shared their tips for avoiding embarrassing slip-ups.

“This is why I only share window and not screen,” one user commented.

And many thanked Platsky for sharing the funny story.

“I am delighted – thank you for sharing omg,” one person commented.

“This made my whole effing day,” another responded.

“It’s been so fun to read the comments because it seems like this has happened to everyone, which made me feel so much better. It’s so easy to zone out during endless Zoom meetings and start working on other things,” Platsky told the Daily Dot.

Platsky continued, “I think the larger issue is, why are we on so many pointless meetings? Interestingly, that’s why I founded my software startup (also called Nitetoast), to kill pointless meetings and hopefully help people avoid the situation I found myself in years ago.”