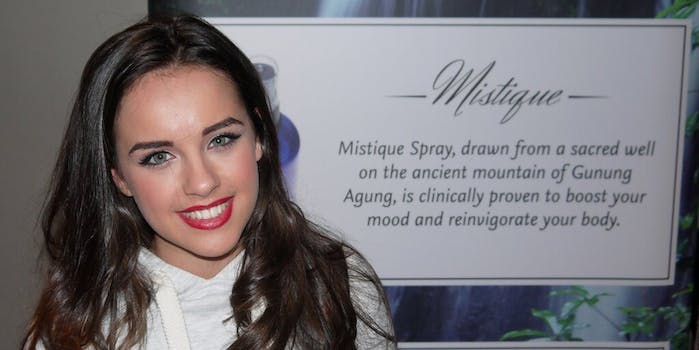 Coronation Street stars were caught endorsing a fake brand that translates to "corporate whore" in Italian.

A number of stars from ITV soap opera Coronation Street, one of the biggest shows in Britain, have been caught promoting fake goods on Twitter.

The sting was part of an investigation into advertising practices carried out by Dispatches, a current affairs series on rival network Channel 4, the Irish Independent reported.

Over the last couple of years, the Advertising Standards Authority has clamped down on stars promoting goods on Twitter. The body demands celebrities make it clear they’ve received payment or freebies in exchange for their tweets.

Dispatches targeted a number of younger Coronation Street stars and cajoled them into promoting a fake skincare brand and bracelet, which they received at a “gifting event” in Manchester, England.

Actresses including Georgia May Foote, Shobna Gulati, and Catherine Tyldlesey were gifted with bottles of “toner” (actually just tap water) they were told contained vitamins and minerals. The name of the fake skincare company was Puttana Aziendale. That’s Italian for “Corporate Whore.”

The Corrie stars were also tricked into tweeting about a “positive energy” bracelet that was actually just cheap costume jewellery.

Dispatches carried out the investigation back in February. A Twitter account set up to somewhat legitimize the toner and bracelet sent a number of tweets to Coronation Street stars, urging them to enjoy the items. It retweeted some of those who tweeted about the items.

@aziendale well I’ve slept in my bracelet and I’ve sprayed my face several times. Thank you so much I love them! pic.twitter.com/L9ZsaRy6hX

Thank you to @aziendale for my lovely healing anklet!! :) xx

However, ITV is not happy with the Dispatches report. “The programme has made allegations that are false and highly defamatory and we have written to the producer threatening legal action if they decide to broadcast,” an ITV spokesperson said.