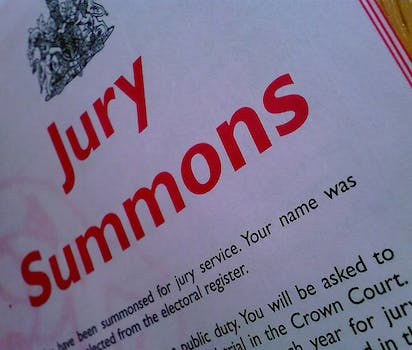 Kasim Davey allegedly posted an inappropriate update to Facebook that read in part, "I've always wanted to F**k up a paedophile."

Here’s a valuable piece of advice for anyone serving in a jury: Stay off social media.

Davey was serving as a juror in the trial of Adam Kephalas, who has since been convicted as a child sex offender by a Wood Green crown court in London. Before Kephalas’s conviction, however, the juror was dismissed from his duties in December 2012 after allegedly posting an inappropriate message on Facebook.

“Woooow I wasn’t expecting to be in a jury Deciding a paedophile’s fate,” Davey wrote, according to The Guardian, “I’ve always wanted to F**k up a paedophile & now I’m within the law!”

Instead of being within the law, Davey will now be facing it after two London high court judges gave Attorney General Dominic Grieve the go-ahead on Wednesday to prosecute him for contempt of court, or “an act likely to interfere with the due administration of justice.”

Davey’s potential conviction is the latest in a litany of cases in which social media usage has interfered with an ongoing court case. In the last year alone, the impartiality of two Kentucky jurors was called into question after it was discovered that they were Facebook friends with the victim’s mother, a Canadian murder case was ruled a mistrial after a juror made disparaging comments about the defendant on Facebook, and the trial of an Arkansas inmate was suspended after a member of the jury tweeted at least four times during the judicial proceedings.

In fact, the issue of jurors using social media to talk about their respective cases has been so pervasive that the Judicial Conference Committee on Court Administration and Case Management created new federal guidelines in September 2012 banning any member of the jury from using Facebook, Twitter, and other platforms while serving the court.