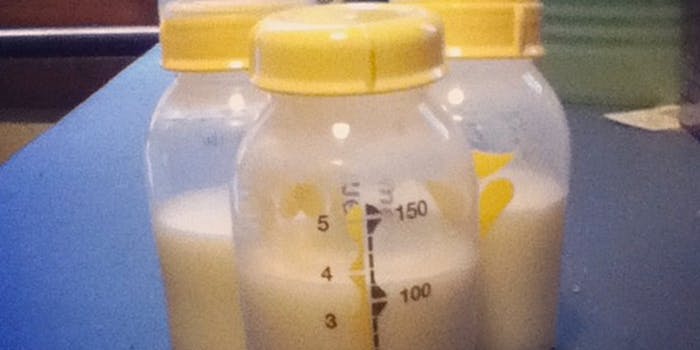 Despite health department warnings, women are freezing their breast milk and sharing it with Facebook friends who can't breastfeed.

Oversharing on Facebook has reached a new level: Women in Canada are using the social networking site to donate breast milk.

The southwestern Ontario chapter for “Human Milk 4 Human Babies” has racked up more than 1,000 likes with eager moms using it share excess breast milk to those in need. The group, which relies on the members to do their own background checks, is concerning Canada’s public health service.

Health Canada is warning users of the Facebook group that unregulated sharing of unprocessed breast milk could be harmful if the milk is improperly treated or contains diseases.

“Breastfeeding promotes optimal infant growth, health and development and is recognized internationally as the best method of feeding infants. However, unprocessed human milk should not be shared,” a Health Canada spokeswoman said to CBC News.

“There is a potential risk that the milk may be contaminated with viruses such as HIV or bacteria, which can cause food poisoning,” the spokeswoman continued. The organization added that traces of drugs (both nonprescription and prescription) can be transmitted via the milk, which might have unforeseen consequences.

“If a mom is on there looking for a donor, and has found someone who’s made an offer, they have the ability—even before they even message them—to kind of poke around in their life a little bit and decide whether this person looks like someone I would trust,” said Gauthier.

And users of Human Milk 4 Human Babies, which has chapters across the world according to a Facebook search, are satisfied. Lindsay Logsdon, a mother of four, uses the group to siphon her excess breast milk to those who can’t breastfeed.

“It has been really great to watch these babies grow and thrive and know that I’ve contributed in some way to their well-being,” Logsdon said.

Health Canada’s warning doesn’t faze mothers who regularly use the Facebook group, either. New mother Erin Samson, who suffers from an insufficient glandular tissue problem, said the group has been a lifesaver for her since she can’t breastfeed.

“It’s a very emotional time right after you’ve given birth. I had always wanted to breastfeed. It was just something I assumed I would be able to do,” she said. Samson receivers her milk from Gillian Slate, a friend and heavy user of Human Milk 4 Human Babies.

Slate has donated to more than a half-dozen families from across Canada who often travel hours to pick-up her frozen breast milk.

“I started donating with my first son,” explained Slate. “I was exclusively pumping and I had quite the oversupply. My freezer was filling up with frozen breast milk.”

In 2013, that’s a problem that’s now being solved by Facebook.