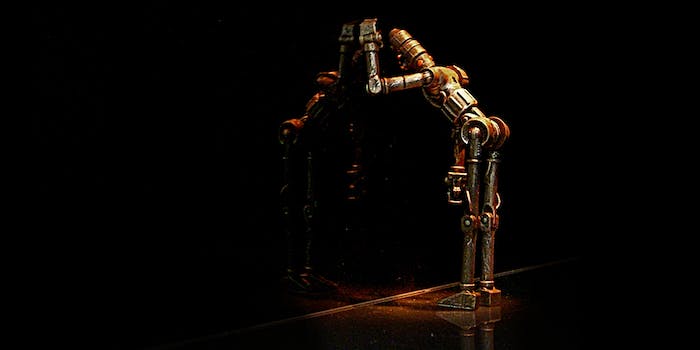 How couples will break up in the year 2115

Romance won't die—but it will get weird.

When we look to the future, we think about gleaming spaceships, soaring cities of glass, and human lifespans that approach immortality. But what will the dating world look like? There’s a personal price to be paid for all this progress—so consider this dramatic dialogue a warning:

Great! I didn’t have to leave my chair once.

I know, I was working across from you, remember?

Of course, of course.

Anyway, I wanted to talk to you about the Infinity operation.

I’m gonna get it.

I’ve thought about it a lot.

I can’t be with someone who isn’t going to live forever.

It just doesn’t make sense for me to invest 50 years in a relationship that will end in you being a corpse, you know?

You’ll be bloated, hard, and 100% dead, and there I’ll be: super youthful, sturdy, handsome, prowling the funeral for a twentysomething to do it all over again.

So we’d have the most amazing sex. She’d know things you didn’t because, of course, the future. And then I’d ask her to get the Infinity operation, and she’d either be like, “Yes! I want to only have sex with you forever!” Or, “I can’t, I’m sorry. But let’s do it one last time together. On a mountain.”

And it would be great! We’d make the earth tremble. Boulders would tumble and an avalanche would start—oh, I should’ve mentioned, it’s wintertime—and the snow would bury an entire village at the foot of the mountain.

Thousands dead. Thousands. Rescue workers would have to wait months for the snow to melt in order to see the bodies frozen in time. A modern Pompeii. A man proposing to his girlfriend. A kid learning to ride a bike. A dog licking its owner’s face.

Thousands of people dead. And the scientists would ring my doorbell, asking how it was possible to start such a massive avalanche. It would be all over the news—the story of our massive sex, that is. We’d be legends. But, again, I’d have to stress it in the media repeatedly, that yes, while I am capable of such monstrous sex, we need to remember the victims. The thousands that died because of our sex—and when I say ‘our’ I don’t mean you and me, of course, I mean with the twentysomething I met at your funeral.

Do you have to be so selfish? There are thousands of lives at risk here. I can’t commit genocide. If you can, then you’re not the kind of person I could ever be with anyway. Goodbye.