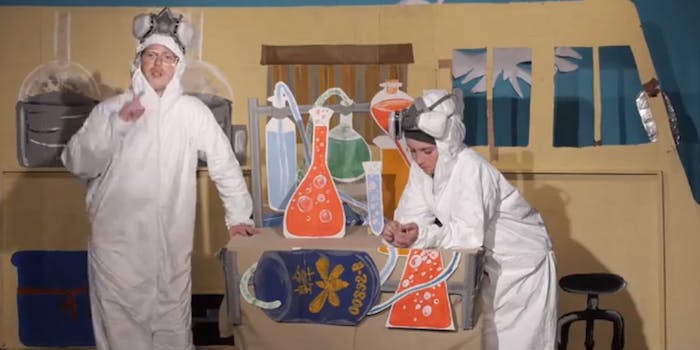 In exactly seven days, Breaking Bad—the best television drama since The Wire—returns for the second half of its final season. Catch up here.

In exactly seven days, Breaking Bad—the best television drama since The Wire—returns for the second half of its final season. To get you excited for what will sure be a crazy eight episodes, comedic duo Rhett & Link have uploaded a five-minute recap of the show done in the style of a middle school musical. You haven’t experienced the diabolical Heisenberg until you’ve seen him portrayed by a chubby preteen.

A quick warning: The video contains spoilers. Then again, if you haven’t already watched seasons 1 through 5, fork over your Internet connection. You have no excuse.

This isn’t Rhett & Link’s first venture into summarizing popular films and shows in the form of a low-end musical production you’re forced to go to because your little cousin is playing Cactus No. 3. This year alone, they’ve summed up The Man of Steel and Star Trek.