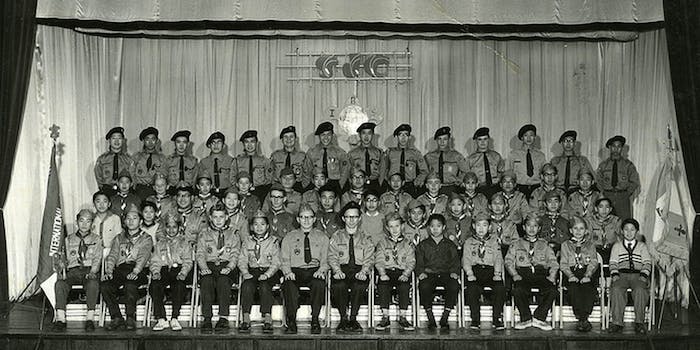 Boy Scouts: You can be gay until you turn 18

One thousand four hundred voting members of the national council of the Boy Scouts of America met Thursday in Grapevine, Texas, and voted 61 percent in favor to put an end to a policy that excludes gay children and teens from participating in the organization.

Gay leaders, however, still have no place in Scouting.

It was only last July that the organization reaffirmed its stance on excluding gay youth. Attitudes about homosexuality are changing, and many young parents and teenagers have been vocal supporters of overturning the policy in the recent months.

Wayne Perry, president of the Boy Scouts of America, authored a piece in USA Today urging the members to allow gay youth the right to participate in Scouts.

“The change to the Boy Scouts of America’s membership policy is not the result of pressure from outside; it is the result of extensive dialogue within the Scouting family,” Perry wrote. “No matter what your opinion is on this issue, America needs Scouting, and our policies must be based on what is in the best interest of our nation’s children.”

The vote has shown that a lot can change in a year.

Across the Internet, people voiced their opinion on the ban and how the leadership should vote. As @hill_Charlotte noted on Twitter, more than 1.8 million people have signed petitions on Change.org relating to the organization’s policy.

Many of those in favor of repealing the rule cited human rights and equality as the motivation for ending the policy.

If the #BoyscoutsofAmerica feel they’d lose membership if they supported gays, it would be a good thing! Like House Cleaning the Bad Eggs!!

#Boyscouts I hope the scouts make the right decision, the human rights decision and decide to take gender orientation out of the question.

Pray that the #BSA will embrace inclusion, decency, and dignity. #BoyScouts

And while many of the messages were in favor of repealing the ban, some politicians and pundits, including Senator Ted Cruz (R-Texas) and Texas Governor Rick Perry, voiced their opposition to the vote.

Pray the Boy Scouts of America stay strong and true to their traditional values. #BSA

George Takei, Star Trek star turned Internet icon, took to Facebook to show his support for ending the 22-year-old ban on gay members. In the post, Takei urged the organization to repeal the policy that has barred many scouts and leaders from participating in Scouts.

Takei also changed his profile picture, adding a Scout badge and the words “It’s OK to be Takei in Scouting”—a nod to the YouTube video in which Takei told people to substitute his name for the word “gay” in protest of Tennessee’s “Don’t say gay” bill.

“I was a boy scout, and it was an important part of my identity. I hope that the organization does the right thing,” Takei wrote on Facebook.

Other celebrities on Twitter joined Takei in showing support. Snooki, Ross Mathews, Minka Kelly, and indie-pop band Tegan and Sara all tweeted a message saying “We support equality” and that the Scouts should “end the ban on gay scouts and leaders!”

Although messages of support were heard loudly on social media, the vote only affects Scouts. A ban on gay leaders will continue.

Scout officials who spoke on condition of anonymity told The New York Times that a proposal to allow gay leaders in the organization would have no chance at passing and may drive away a large number of members and sponsors.

But one question still remains:

So an organisation that discriminates against gay people yet mandates that it’s members wear a sash? #BoyScoutsOfAmerica #logic