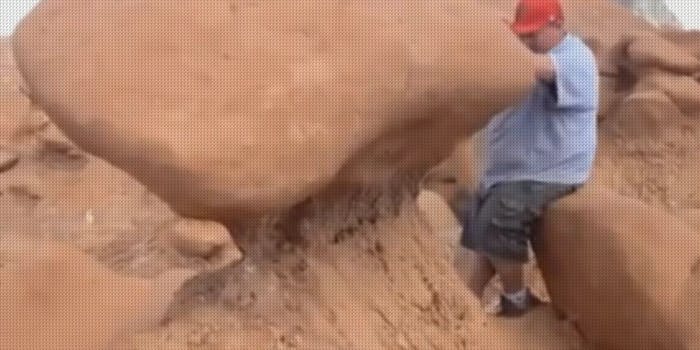 Three Boy Scout leaders face felony charges after they recorded themselves destroying historic rock formations in Utah’s Goblin Valley—structures that have been in place for 20 million years.

In a minute-long video posted to Facebook, the men can be seen pushing over these mushroom-shaped rock formations that have had their bases eroded by water over time. The rocks themselves date back 165 million years, the Salt Lake Tribune reported. Salt Lake City’s FOX13 identified two of the men, Glenn Taylor and Dave Hall.

“Some little kid was about ready to walk down here and die and Glenn saved his life by getting the boulder out of the way,” the cameraman says in the video. “So it’s all about saving lives here at Goblin Valley.”

The video skyrocketed to popularity thanks to Reddit. Since Thursday, it’s collected nearly a half-million views.

“It is not only wrong, but there will be consequences,” Utah state parks spokesman Eugene Swalberg told the Tribune. “This is highly, highly inappropriate. … This is not what you do at state parks. It’s disturbing and upsetting.”

In an interview with FOX13, Taylor said he regretted his actions.

“I wish we would have been smart enough to go get a ranger, ’cause it was wrong of us to be vigilantes, and I’m sorry I did that,” he said.