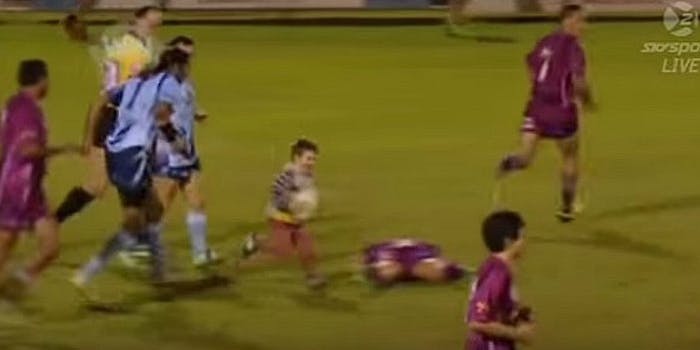 His run is breathtaking.

Rugby players are some of the toughest athletes on the planet, and nobody knows that better than ex-rugby players who still have to nurse their injuries from long ago. But that doesn’t mean those men of steel don’t have a soft spot for a toddler who somehow finds himself on the field in the middle of the action.

So, in a legends game—in which former competitors from New South Wales and Queensland played a match for charity—the action ceased momentarily, and a 4-year-old kid became the unstoppable star.

Seriously, nobody could stop him.

Props to the opponent for deliberately failing to tackle the boy, but also credit must go to the game’s referee, who ran the entire length of the field to make sure all of the game’s agreed-upon rules were being followed.

According to the Mirror, the boy had somehow been separated from his mother before he found himself running for a 100-meter try (and then somehow making the conversion kick afterward).

Hopefully, mother and son were reunited quickly thereafter. Either way, the 4-year-old left his mom as a young kid, but after playing with the big boys and finding all kinds of success, he returned home as a man.