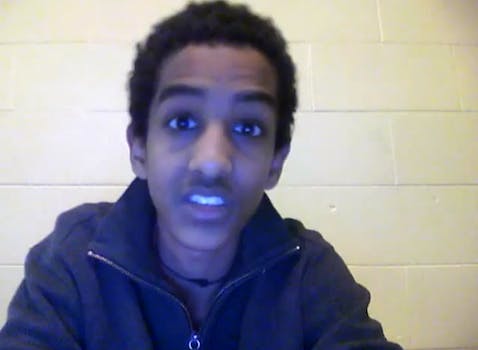 A YouTube account that appears to belong to Robel Phillipos has just one video, a webcam thing on Earle Perry Charlton."

Just one day after three college friends of Boston bombing suspect Dzhokhar Tsarnaev were arrested in connection to the Marathon bombing case, a 2012 video surfaced giving insight into one of the suspects.

Robel Phillipos, along with Kazakh nationals Dias Kadyrbayev and Azamat Tazhayakov, attended the University of Massachusetts at Dartmouth with Tsarnaev, and they are accused of removing Tsarnaev’s laptop and a backpack filled with fireworks from his dorm three days after the bombing.

A YouTube account that appears to belong to Phillipos has just one video, uploaded on March 16, 2012 and titled “Charton Story Robel Phillipos,” which he described as his “webcam thing on Earle Perry Charlton.”

According to The Daily Caller, UMass Dartmouth offers a class for first-year business students on the life of Earle P. Charlton, a founder of the F.W. Woolworth Company (and whose descendents provided funding for the Charlton College of Business at UMass Dartmouth).

“The course, via the real world Charlton story and hands on business plan exercise, is designed to immediately immerse first-year students in the excitement of the business world,” a course description states.

In the video, Phillipos answered a number of questions for the class about Charlton’s life as an entrepreneur and charity work.

About three-and-a-half minutes in, Phillipos brings his life into the conversation when he is asked what he would do if he came into a large sum of money like Charlton.

“I kind of grew up the same way [Charlton] did,” Phillipos said. “I grew up in a very mild mannered, you know, way of living. Wasn’t too poor. Wasn’t too rich. I was, you know, your average guy.”

He compared himself to Charlton—not only with how they both grew up but how their experiences shaped them and how they’d handle that money as philanthropists.

“But I’ve experienced so much, you know, going to Africa,” he continued. “I’ve seen the ‘depths of hell’ and back. I’ve seen the poor people, and I can definitely see myself giving a lot of money—not only money, but actually trying to make a difference.”

He was charged on Wednesday with lying to investigators and faces a maximum of eight years in prison and a $250,000 fine if he is convicted.