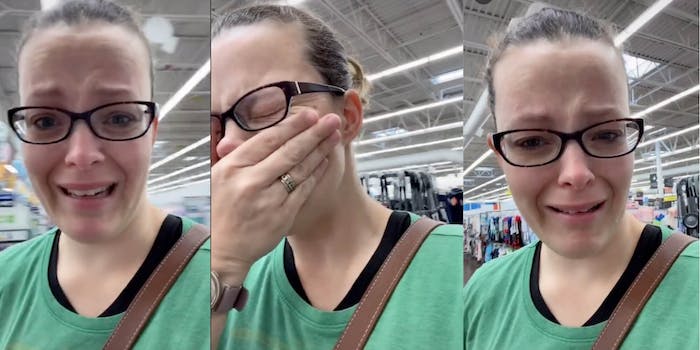 'How am I supposed to diaper my child if I can't afford 20 at a time like you can?'

Lauren Whitney, a mom of four, made a TikTok video of herself crying in a supermarket to show people the ramifications of stockpiling necessities amid the coronavirus (COVID-19) pandemic.

Whitney went to several stores in hopes of finding diapers in her daughter’s size, according to BuzzFeed. After ending up in a diaperless Walmart, and feeling defeated upon the realization that she probably wasn’t going to find diapers at any store, she made the TikTok.

“How am I supposed to diaper my child if I can’t afford 20 at a time like you can?” she asks in the TikTok while sobbing.

Whitney told BuzzFeed that she created the video with the intention of keeping it in her drafts but accidentally uploaded it instead.

“I … logged on an hour later to see it went viral. I debated taking it down, but decided it needed to be seen,” Whitney told BuzzFeed.

The coronavirus has so far killed nearly 9,000 people and infected more than 217,000 others worldwide. Against officials’ suggestions, people have been flocking to supermarkets and wiping out store shelves. Hot commodities among panic-buyers include soap, hand sanitizers, cleaning supplies, toilet paper, and water. Supermarkets are even putting limits on the number of certain items shoppers can purchase to avoid shortages.

Eventually, Whitney found two packs of diapers in her daughter’s size, a size five. She only purchased one pack.

“I’m going to leaving this one for someone else,” Whitney says in another TikTok as she puts back one pack of diapers.