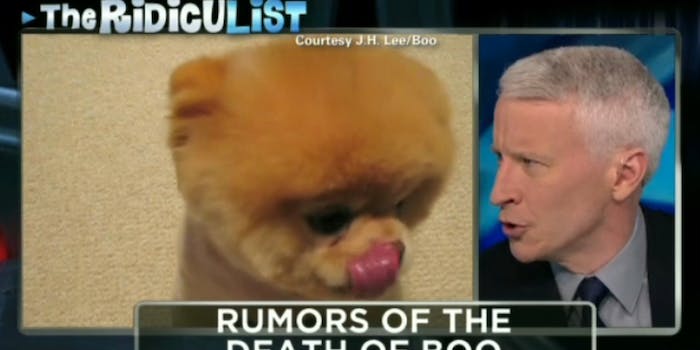 The CNN anchor cleared the air on Thursday night about everone's favorite Pomeranian on Facebook.

The Internet’s cutest dog, Boo, isn’t dead, and Anderson Cooper is on the case.

Best known for his reporting in war-torn countries, the CNN anchor devoted three minutes on Thursday night’s show to rant against the rumors that Boo had died. The speech was part of Cooper’s nightly, rambling segment devoted to things that annoy him called “The Ridiculist.”

The rumor was started by Gizmodo writers Sam Biddle and Jesus Diaz, who jokingly tweeted Wednesday that the adorable Pomeranian died in a duck pond. Gullible tweeters believed the rumors and even a hashtag, #RIPBoo, trended. That forced Boo to release a note to his four million Facebook fans, stating that he’s fine.

But the debunked rumors still bothered Cooper. He accurately told viewers to “set your phasers to adorable” and said the pooch is “widely considered the cutest dog in the galaxy.” Also true!

After explaining how the rumors started, he finished the segment reminding us not to believe everything we read online (especially if its from Gawker, he probably wanted to add).

“A Twitter rumor, cleared up on Facebook, by a Pomeranian,” joked Cooper. “We are down the rabbit hole, people.”