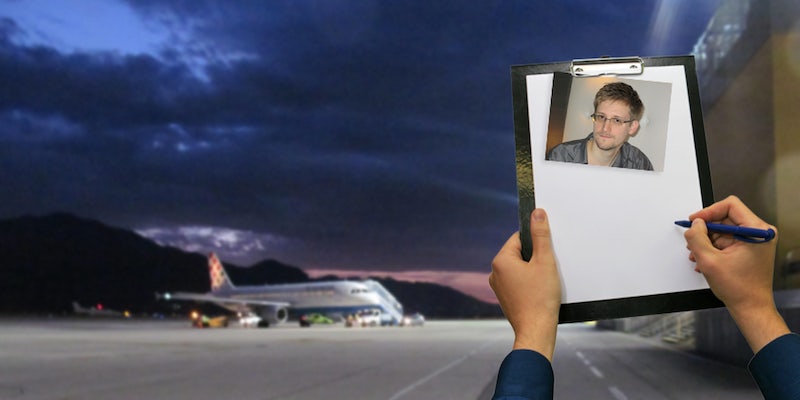 President Evo Morales, denied airspace by several countries, was forced to land in Austria, where his plane was searched for the NSA whistleblower.

Snowden wasn’t there, and there are no new reports to indicate the NSA whistleblower has left that strange, nationless zone of the Moscow airport where he’s been stuck since the U.S. charged him with espionage and revoked his passport. The very threat of his presence, however, was enough to cause an international incident.

It’s not clear exactly what intelligence led several European nations to believe Snowden was aboard Morales’s plane as he flew home to La Paz from Moscow, where he’d been discussing energy imports. However, the day before, Morales had told RT news that he would certainly consider granting Snowden asylum. In contrast to other reports, Morales said Bolivia hadn’t received a formal request.

According to several reports, Morales’s plane was denied airspace from several countries, including Italy, Spain, and Portugal, and was experiencing technical problems, so it grounded in Austria. There, Vienna airport police asked for permission and searched the plane. They found five crew members and six associates of Morales, but no Snowden.

Needless to say, Morales was less than pleased with the situation. “We are no longer in the colonial period,” he told reporters.

Argentine president Cristina Kirchner livetweeted learning of the experience and of calling Morales.

“They’re definitely all crazy,” she posted in Spanish. “Head of State and his plane have total immunity.”

“We have the suspicion that [the nations that denied airspace] were used by a foreign power, in this case the United States, as a way of intimidating the Bolivian state and President Evo Morales,” he said.

President Obama said last Thursday that he shouldn’t have to meet with Russian and Chinese leaders about the Snowden situation, and that the U.S. is  “not going to be scrambling jets to get a 29-year-old hacker.”