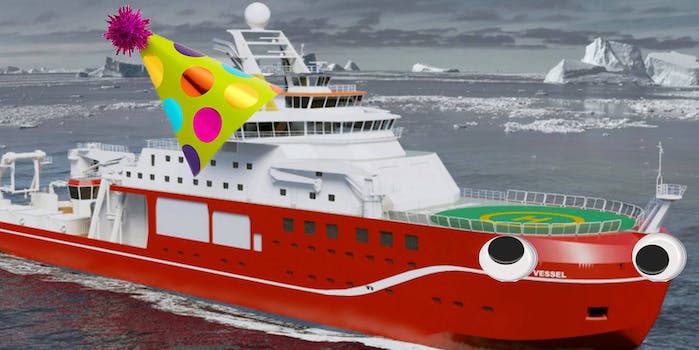 Every now and then, people rally around a single cause, willing it into reality. Sunday brings one of the most important achievements of collective action in recent memory: Boaty McBoatface has officially won an online poll to name a $300 million research ship in the U.K.

A total of 124,109 people cast their vote for Boaty McBoatface, which ended the contest as the undisputed winner by lapping its competition—it finished with four times as many votes as the next most popular option.

Our #NameOurShip campaign has now closed. Thank you all for your overwhelming interest and support. pic.twitter.com/xuSG0S7DaF

The polling began last month when the Natural Environment Research Council (NERC) decided to let the Internet have input on the name of its newest vessel. Shortlisted names were made available, but NERC gave people the ability to add their own options as well—which led to the inevitable rallying around the name Boaty McBoatface.

It’s worth noting that NERC still has final naming rights on the ship and can overrule the will of the people if it so chooses, though it would be foolish to do so.

Thank you all for supporting our #NameOurShip campaign. The final decision will be announced in due course. pic.twitter.com/yg4VHvNrm5

Most research shows that we as a people are more polarized than ever before. The gap between ideologies and belief systems continues to widen, and those who once occupied the middle ground are disappearing. Boaty McBoatface is the one thing that has brought us together and for that, we are forever indebted.