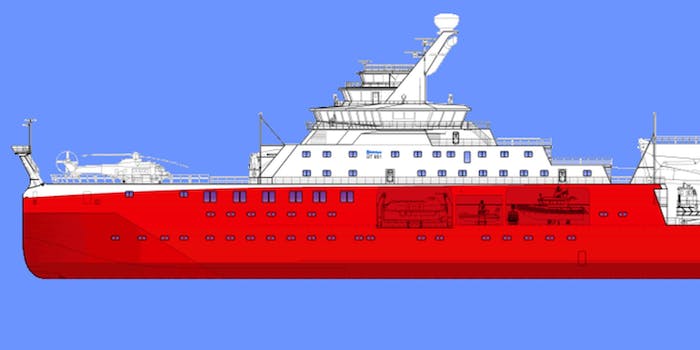 It started out as a dreary online contest to name a kinda boring research ship destined to plow through slushy polar ice in the service of Britain’s Natural Environment Research Council (NERC).

But one gag name quickly skyrocketed to the top of the list, with over 15,000 votes. If the people of the Internet have their way, NERC’s scientific research vessel will be christened the RSS Boaty McBoatface.

Fans of the name are so intent on its winning, they’ve even managed to push RSS Boaty McBoatface the Return into the fifth top spot as a backup.

Top ten names on the @NERCscience #NameOurShip vote. Top three all brilliant, but wow what a result for science comm pic.twitter.com/tSLe8P9QPN

The contest’s popularity caused the web page to shut down, too, and NERC was forced to post an update on Thursday apologizing for technical issues “due to overwhelming interest.” The Daily Dot tried (and failed) repeatedly to view the crashed contest site, which will hopefully be back up soon.

James Hand, a communications manager at the Independent Association of Prep Schools, originally suggested the name in the online poll—and gave an interview to BBC on Monday in which he clarified that about 90 percent of the boat names entered were jokes.

“Some of the names were really, really funny,” Hand told the BBC’s Radio Jersey. “Clifford the Big Red Boat—that’s my favorite.”

Hand said he threw RSS Boaty McBoatface into the ring on a lark, thinking it would get lost among the many other silly suggestions. But by Friday night, friends were tweeting at him about the rise of McBoatface—and by Saturday, the NERC ship-naming contest site crashed due to thousands of users trying to upvote the popular handle. In a typically British fashion, Hand reached out to the NERC organization to apologize for inadvertently hijacking the contest and tanking the website in the process.

I'm terribly sorry about all of this, @NERCscience.

My apology for #BoatyMcBoatface was in the most British sense. I stand by it being a brilliant name.

As one Twitter user pointed out, though, all the votes in the world may not be enough to make RSS Boaty McBoatface a reality. The final naming decision rests in the hands of NERC’s chief executive.

Let's not get too carried away with RSS Boaty McBoatface #NameOurShip pic.twitter.com/y3UdpiUOD1

Monday saw the emergence of a petition that aims to “Save Boaty McBoatface” from possible extinction, even while the contest is ostensibly still open. At this point, were the NERC higher-ups to decide on a different name, there could be riots in the streets. Or at least on Twitter.

Though the popular vote is clear, NERC has already thrown a slight bit of shade to the idea: On the organization’s website, a photo upload of the proposed vessel is titled “im-a-ship-not-a-boaty-mcboatface.png.”