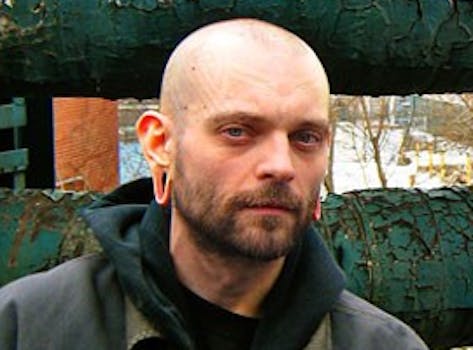 Body modification enthusiasts know judgment better than most. For the founder of BME Zine, prejudice may have cost him the final years of his life.

Body modification enthusiasts may know better than most people what it’s like to be judged on sight for their piercings, tattoos, scars, and other forms of body art.

For Shannon Larratt, the founder of BMEzine, this societal judgment may have cost him the final years of his life.

The 39-year-old writer and publisher, perhaps best known outside his community for ModCon: the Secret World of Extreme Body Modification, died on March 15 of an apparent suicide. On his blog, a letter that he spent months carefully composing was made public after his death. In it, he discusses his deteriorating quality of life due to calcification, a process in which the body replaces soft tissue with calcium deposits, caused by a genetic disease known as tubular aggregate myopathy.

In a moving examination of his own medical treatment, Larratt discusses the marginalization of body modification enthusiasts by the medical profession:

I do believe that there were fundamental shortcomings in the way both my condition and my pain was treated, and that the last few years could have been much more pleasant if the pain had been more aggressively managed. I believe this was in part because of the prejudice of multiple doctors due to my appearance causing them to stereotype me as drug seeking (and the simple reality is that it can be hard to tell, and we are so cruel as to prefer to “punish” the sick than to “reward” the mentally ill). I wish there was some way to make those doctors understand the cruelty they enacted. A patient should have the right to a pain free life, even if that comes with some risk.

Even before his medical diagnosis in 2010, Larratt was no stranger to this kind of prejudice. In a 2004 blog post about the superficiality of tattoo culture, he wrote, “Being a modified person in an unmodified world can really suck. … Most people think we’re a bunch of losers, and few of us work to change that perception.”

But Larratt was one of those few. A former online casino designer, he quit his day job in 1995, the year after founding BME, the oldest online zine devoted to body modification. Its publisher until 2008, Larratt evolved into an expert on all forms of body modification, hosting private gatherings for enthusiasts and promoting safety and education on the BME forums—for everything from bloodplay to suspension.

“BMEzine … was like the island of misfit toys, where we “freaks” could all share our experiences, our kinks, art, and random thoughts in a safe online environment,” wrote blogger Marisa Kokoulas.

“Shannon boldly published the most “extreme” and “shocking” imagery on the web,” echoed Feminisnt:

[T]he “BME Hard” section of his web site contained photos of voluntary castration, cliterodectomy, nipple removals, testicles turned into pincushions, and just about everything “weird” that a person could do to their body and genitals. … For his work in pushing the envelope and putting himself at risk of obscenity prosecutions, we are all in Shannon’s debt, whether we are pornographers, kinksters, artists, body mod practitioners, or just people who don’t believe in censorship.

But Larratt knew the cost associated with pushing the envelope. “We … are effectively a self-made minority and are treated as such,” he wrote about his community.

Writing about Larratt’s suicide, disability blogger William Farley noted that “there are obvious parallels between the bias modified people encounter and the bias people with a disability encounter.”

These biases ultimately took their toll. “[C]ountless others in Canada and abroad are going through this right now even if I’ve escaped it,” Larratt wrote in his suicide note about the prejudice involved in his medical treatment.

Larratt also left a moving plea for a flexible and understanding right-to-die law in Canada—one that might actually have prolonged his own life:

It is my strong believe that if I had known that there was a “safe,” pain-free way for me to go at a time of my choosing, hopefully at home surrounded by love, it would have brought me not just enormous peace, but I believe would have given me strength to fight this even longer than I have.

Yet despite his awareness of the difficult reality that he and other body modification practitioners lived in, Larratt’s final letter is a hopeful parting statement to anyone who may have struggled with their own individuality or identity.

I have no fear of death itself in part because I know that the life I chose allowed me to have a special role in changing the course of human civilization … there’s never been a point in human history where individuals have had this level of self-expressive control over their morphology and physical decorations. … And I’d like to think that even though I was a big puzzle piece in body modification, that I was a smaller but still important puzzle piece in a larger movement of people from all sorts of different subcultures fighting for mutual support in a diverse [pantheon] of self-expression and dream chasing.

If the many comments and reactions to his death from the BME blog and around the Web are any indication, then Shannon Larratt will continue to inspire his community. And, perhaps, contribute to the further acceptance of people whose dream-chasing takes on an outlandish appearance.