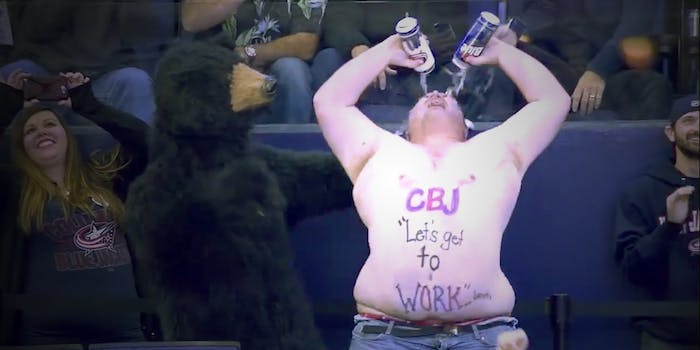 This is how a real hockey fan celebrates

This exuberance is the mark of a true enthusiast.

Take two cans of beer and some high-octane hockey, add a portly sports fan, throw in a shameless costumed mascot, garnish with a dash of Lil Jon, and what do you get? I couldn’t tell you—all I know is that it’s a must watch:

This exuberant fan is cheering an Ohio hockey team called the Columbus Blue Jackets. The fact that he inked himself up beforehand clearly shows that he put some thought into this and that it wasn’t just a spur-of-the-moment celebration. Plus, as one Redditor has pointed out, it’s not the first time he’s been caught on camera.

Brb, going to Ohio to grab a beer with this dude.