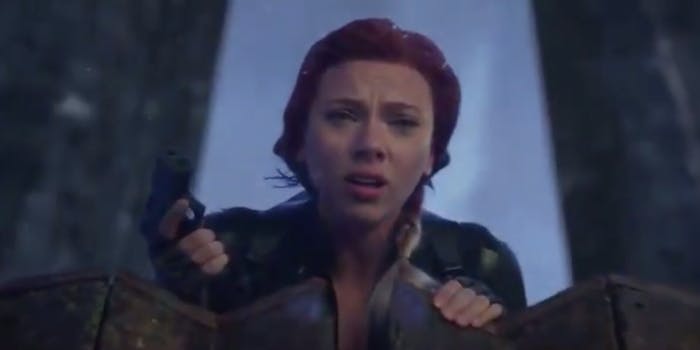 'That’s the way Romanoff should have gone out.'

It’s been just under a year since Avengers: Endgame arrived in theaters.

The film stole our collective attention for 12 months leading up to its release, thanks to the devastating ending in Avengers: Infinity War. Literally hundreds of millions of lives are saved by the efforts of the Avengers in the film, but Endgame has its own fair share of heartbreaking moments. In order to save all those lives, Tony Stark and Natasha Romanoff were forced to make permanent, painful exits. Fans were equal parts thrilled and agonized over losing two original Avengers.

It turns out that Natasha’s final moments could have happened differently. In an alternate scene, she still dies to allow the team to obtain the Soul Stone, but the events surrounding her death are starkly different. The scene recently made its way onto Twitter, after user @goshromanoff shared it to their followers. The post has since racked up nearly 2,000 likes and 424 retweets.

In case you need a refresher, here’s how the original scene went. Natasha and Clint—a.k.a. Hawkeye—upon realizing that a sacrifice was necessary to obtain the Soul Stone, both tried to sacrifice themselves so the other could survive. Clint nearly managed to best Nat, leaping from the edge of the towering cliffside, but she bested him. After securing him to the stone wall, she slowly slipped from his grip in an emotional, heartfelt scene that aimed to emphasize the relationship the two characters had.

It was stunning, but it didn’t connect with every viewer.

Now many of those viewers who were less-than-impressed with the original scene find themselves blown away by the alternate version.

Rather than the eerie calm of the original, the clip reveals a chaotic, violent setting for the alternate scene. The brief, 2-minute clip begins with Natasha abandoning her cover to make a dash for the edge of a battleground. In the background, Thanos’ men can be seen flooding off of a ship, presumably to stop the Avengers.

As Natasha sprints for the edge, presumably to sacrifice herself as she did in the original, men flood around her and gunfire streaks past. Several shots strike her, slowing her progress as she staggers forward. When a shot finally takes her through the chest, she tumbles to the ground. Several slow, painful moments show her dragging herself closer to the side.

As she reaches the edge, she and Clint share a long look. Natasha’s smile is shattered by the appearance of Thanos, who looms in the background of Clint’s shot. Her smile withers and, as it is replaced by horror, she flings herself backward off the edge.

The scene maintains the gut-wrenching nature of the original but has little else in common with it. Rather than emphasize the unbreakable bond between Nat and Clint, the alternate scene underline’s Natasha’s resolve.

Many people found the alternate scene far more impacting than the original. “Are you kidding me,” one user said. “This was sooooo much better!!!!! I was salty as hell at the way she died. You know they did this so RDJ would have all of the glory cause you totally forgot she died by the end.”

There were, of course, those who far preferred the original. “I do like the one in the movie because it sort of completes the idea that they always end up fighting each other so it has an almost fun tone but gets more and more serious as the end gets closer,” one person wrote.

Some people were blown away by the alternate scene, and couldn’t make up their minds which take was better. “As a storyteller, do you use this take where she dies as a sacrifice for the greater good, or go with the one in the film, an intimate insight into their relationship,” one user wrote. “Tough choice.”

Other’s noted that while Thanos’ arrival was striking, it wouldn’t have made sense in the final product. In Endgame, Nat and Clint head to Vormir to gather the stone after the original Thanos is dead, but before—or at the same time—past-Thanos discovers their plot. His arrival on the planet would have thrown a hitch into the entire timeline.