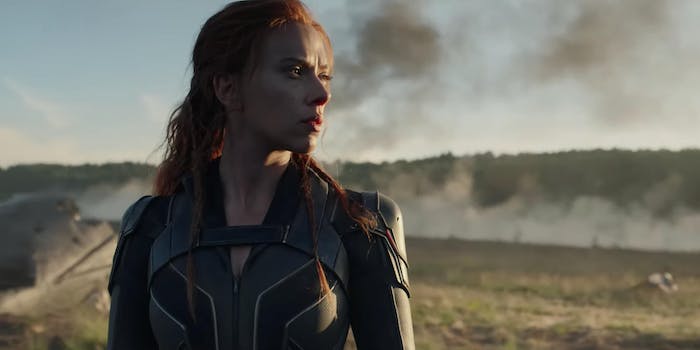 The latest trailer brings new life to the film.

There’s a lot going on in the world right now, so it’s easy to forget that a Black Widow movie is actually coming out in less than two months. But with a major focus on the plot, the Taskmaster, and Florence Pugh’s Yelena Belova, the latest trailer has a lot to offer.

Told largely from Yelena’s point of view, we’re introduced to the main conflict: The Taskmaster has taken over the Red Room, leaving women “fully conscious but no choices.” Yelena was affected at one point, but it’s up to her, Natasha Romanoff (Scarlett Johansson), Melina Vostokoff (Rachel Weisz), and Alexei Shostokov (David Harbour) to go back to where it all started and put an end to the Taskmaster, a masked figure who’s already taking some of Captain America’s moves for his own.

In theory, this is the film that we’ve wanted for years. But until this most recent trailer, Black Widow has done very little to visually stand out from your average espionage film; with few exceptions (such as Natasha’s presence and namechecking the Avengers), this pretty much could be your average espionage film. Seeing more of Black Widow, Yelena, and Taskmaster in action all give the film an exciting invigoration, that’s for sure.

But the fact that we’re several years out from the peak of Black Widow movie demand and the ill-will Johansson has among some Marvels fans for many of her recent comments probably doesn’t help either. For the most part, it’s the kind of movie you remember is happening whenever you see a trailer in a movie theater—and it’s usually paired off with the much more visually interesting Wonder Woman 1984 trailer.

While the release of No Time To Die has been delayed over concerns about the coronavirus, Marvel Studios isn’t doing the same Black Widow. The end of the trailer confirms that the film will still be released on May 1.