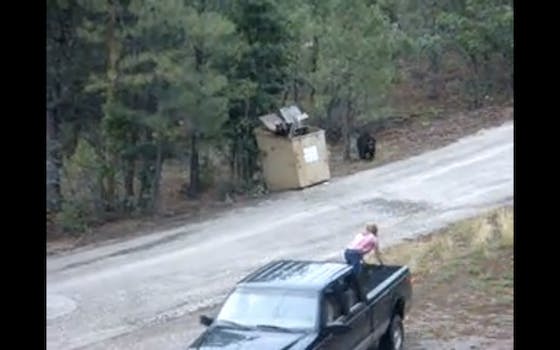 Since Wednesday, nearly 40,000 Facebook users have shared a grainy video of a New Mexico couple resucing three cubs from a dumpster.

It’s barely a minute long, but it’s thrilling, ingenious, and a true testament to human-bear relations.

Since Wednesday, nearly 40,000 Facebook users have shared a grainy video of a New Mexico couple, Tom and Shirley Schenk, who saved three black bear cubs. Stuck for days in a dumpster without an exit, the cubs cried so loudly that the Schenks knew they had to help.

Tom backed his pickup truck up to the dumpster, with Shirley poised in the bed. Taking care to not disturb the bear’s mother, who stood just feet away, Shirley dropped a ladder into the dumpster and Tom quickly drove them off. Almost immediately, the three cubs climbed out.

Amazingly, Shirley said that this was the third time she’d used this ladder to bail out baby black bears.

“I’m glad they thought to video it! exclaimed Joan Boyer. “Pretty brave of them too!! I wonder if the little bears climbed right back in the next day!!”

“I dunno,” replied Ron Cavitt. “When I climbed back to finish looking for supper… they weren’t there.”